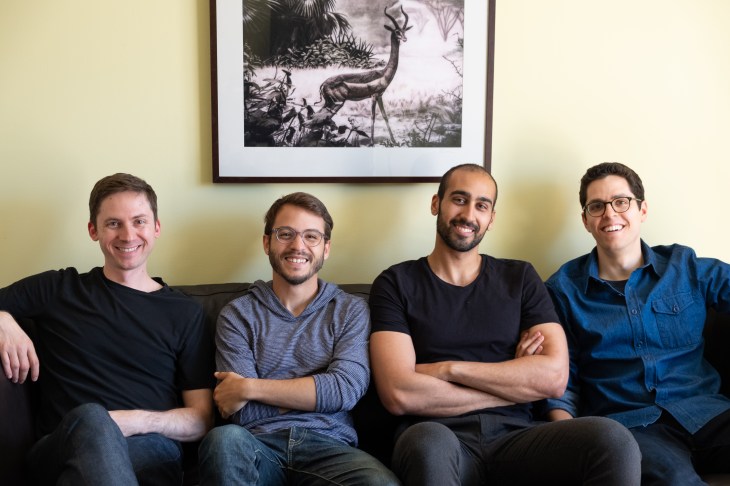 Cedric Dussud, Michael Nason, Ahmed Elsamadisi and Matthew Star (pictured above, in order) spent the summer sharing a house in San Francisco, cooking meals together and building Narrator, a startup with ambitions of becoming a universal data model fit for any company.

Narrator  is one of more than 100 startups graduating next week from Y Combinator,  the San Francisco accelerator program. Put simply, the company provides data-science-as-a-service to its customers: fellow startups.

“We provide the equivalent of a data team for the price of an analyst,” explains Narrator co-founder and director of engineering Star. “Within the first month, our clients get an infinitely scalable data system.”

Led by chief executive officer Elsamadisi, a former senior data engineer at WeWork, the Narrator founding team is made up entirely of alums of the co-working giant. The building blocks of Narrator’s subscription-based data modeling tool were developed during Elsamadisi’s WeWork tenure, where he was tasked with making sense of the company’s disorganized trove of data.

As an early addition to WeWork’s data team, Elsamadisi spent two years bringing WeWork’s data to one place, scaling the team to 40 people and ultimately creating a functional data model the soon-to-be-public company could use to streamline operations. Then in 2017, Elsamadisi had an a-ha moment. The system he created at WeWork could be applied to any data stream, he thought.

“All companies are fundamentally the same when it comes to the kinds of data they want to understand about their business,” Narrator’s Dussud tells TechCrunch. “Every startup wants to know what’s my monthly recurring revenue, why are my customers churning or whatever the case may be. The only reason they have to go hire a data team and hire a business analyst is because the way that their data is structured is specific to that company.”

All Narrator clients use the same consistent format to absorb and manage their data, saving startups time and heaps of money.

Narrator follows a long line of Y Combinator graduates that built startups catering to other startups, as the accelerator becomes more of a SaaS incubator of sorts. PagerDuty and Docker proved that YC companies could build with a strong focus on other YC companies. Brex, a recent YC grad that issues credit cards to entrepreneurs, has leveraged the same startup-focused model for big-time success.

“Why not build a company to make something that other startups can have?” Asks Dussud. “It’s hugely valuable and only big companies have access to it. Let’s make it available to everybody.”

New York-based Narrator sees a massive opportunity ahead. Every company, after all, wants to increase revenue or decrease costs, a difficult task easier accomplished with a data-driven culture.

“If you start to imagine a world where, under the hood, the structure of the data at all companies is the same, you can now start reusing a lot of the things that in the past would actually be quite complicated,” said Star. “Right now, anytime you want to start from scratch with a new data system, you are literally starting from scratch and unfortunately reinventing the wheel. If you had a standardized system, you know, a standardized model, you could start reusing a lot of really wonderful things.”

Narrator is working with 14 clients today, each using an identical data model. Their goal is for Narrator’s structure to become the standard by which all startups do data science. In other words, Narrator hopes to become the operating system for data science.

“What’s kind of amazing is whether we’re working with a financial app … a clothing rental startup or a healthcare company, they’re all using the same data model,” said Star. “Any one of those teams, if they wanted to get the same level of analysis, they would have to hire a data analyst.”

Narrator raised $1.3 million in seed funding led by Flybridge Capital Partners prior to joining YC. Hot off the heels of the accelerator program, there’s no doubt the startup will close another round of financing soon.