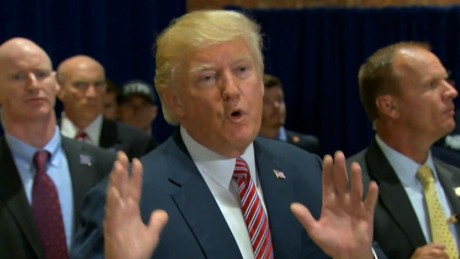 Public figures in Israel, Germany, the United Kingdom and elsewhere have condemned President Donald Trump’s latest remarks on the white supremacist rally in Charlottesville, Virginia, in which he laid blame on “both sides” for the deadly violence that erupted.

Such international criticism joined that of many lawmakers and commentators from both sides of the aisle in the United States.
A handful of voices from the far right offered veiled or open support for Trump’s remarks — reflecting his enduring appeal to a range of populist and anti-immigrant groups outside the United States.
But they were far outweighed by those expressing outrage.
German Justice Minister Heiko Maas directly criticized Trump in a statement early Wednesday, saying: ”It is unbearable how Trump now also glosses over the violence during the march of the right-wing protests in Charlottesville.
“Nobody should trivialize the anti-Semitism and racism of neo-Nazis. When it comes to right-wing propaganda and violence, there is nothing to relativize.
“All democrats should together take a clear stance against it.”
Martin Schulz, leader of Germany’s Social Democratic Party, tweeted: “One must denounce Nazis definitively. What Trump is doing is inflammatory. Whoever trivializes violence & hate betrays western values.”
UN Secretary General Antonio Guterres tweeted: “Racism, xenophobia, anti-Semitism & Islamophobia are poisoning our societies. We must stand up against them. Every time. Everywhere.”

When asked Wednesday about Trump’s comments, UK Prime Minister Theresa May disputed the idea that the two sides in the Charlottesville violence were equally to blame, a Downing Street spokeswoman told CNN.
“I see no equivalence between those who propound fascist views and those who oppose them,” May said at a naval ceremony in Portsmouth, England.
A number of other British lawmakers were heavily critical of Trump’s comments.
Sajid Javid, the secretary of state for communities, posted on Twitter that he’d learned as a child that neo-Nazis were bad and anti-Nazis good. “It was pretty obvious,” he said.
Ruth Davidson, the leader of the Conservative Party in Scotland, tweeted: “The President of the United States has just turned his face to the world to defend Nazis, fascists and racists. For shame.”
Prisons and Probation Minister Sam Gyimah tweeted: “Words matter. Silence matters. We must call out hate — unambiguously — to preserve the free & tolerant society many have fought & die for.” He later added: “The ‘leader of the free world’ loses moral authority when he cannot call fascism by its name.”
Irish Foreign Minister Simon Coveney said his country “condemns outright with no equivocation” the views espoused by white nationalists and the “kind of racism and bigotry that we saw unfortunately on our television screens in the United States in recent days.”

‘Only one side is evil’

Israeli member of the Knesset Tzipi Livni also slammed Trump’s comments equating both sides in the Charlottesville rally.
Livni, the former Israeli foreign minister, tweeted Wednesday: “In Nazism, anti-Semitism and racism there are never two equal sides — only one side is evil. Period.”
Israeli politician Tamar Zandberg, a Knesset member from the left-wing Meretz party, similarly condemned Trump’s stance.
“The doctrine of extremists on both sides is trying to draw an equivalency in a place where it does not exist. Racism and hatred and opposition to racism and hatred are not two sides of the same coin, and the attempt to draw this symmetry gives legitimacy to dark and evil forces that should not have a place in the public discussion,” Zandberg told CNN.
“The stubborn denial of President Trump to denounce neo-Nazis and racists and his flattery of organizations that promote these frightening and unacceptable worldviews … raise serious questions regarding the motivation and the moral consciousness of he who is supposed to be the leader of the free world and the protector of democracy.”
Israeli Prime Minister Benjamin Netanyahu only commented after Trump condemned racism and neo-Nazis in remarks on Monday, tweeting Tuesday: “Outraged by expressions of anti-Semitism, neo-Nazism and racism. Everyone should oppose this hatred.”
Netanyahu was silent about the Charlottesville rally at his weekly statement at the Sunday cabinet meeting. Instead, Netanyahu said Israel would welcome Trump’s representatives to the region before switching to talking about domestic security.
Even Iran weighed in Wednesday on the controversy over Trump’s remarks.
Supreme Leader Ayatollah Ali Hosseini Khamenei — himself an on-the-record Holocaust denier — issued a statement on his official website in reference to Charlottesville in which he said the US should fix its racial-discrimination issues and mind its own business on the international stage.
“If you are a powerful state, then go manage your own country! If you really care, then tackle the insecurities and violence on the streets of Washington DC, New York City, and Los Angeles! If you really care, go fix racial discrimination and the disastrous violations of human rights for both whites and blacks in your own country! Mind your own business, rather than meddling with other nations’ affairs!” he said.

Far-right groups around Europe have remained largely silent over the events in Charlottesville and ensuing backlash against Trump’s comments.
But Nigel Farage, the former leader of Britain’s UK Independence Party and a member of the European Parliament, backed Trump’s argument that leftists were forcing the rewriting of US history through efforts to remove Confederate monuments and symbols from public spaces. It was one such initiative that brought white nationalists and others to Charlottesville to protest in a park that is home to a statue of Confederate Gen. Robert E. Lee.Commenting on a quote from Trump in which he asked whether statues of former President George Washington would also be taken down, since he was a former slave owner, Farage said: “I am very pleased @POTUS had made this point. We must not rewrite American history to suit the hard left.”
Source:-CNN
Tweet Pin It