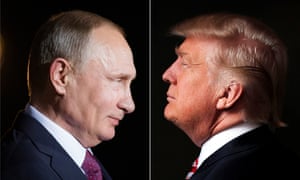 Vladimir Putin has beaten Donald Trump to top Forbes magazine’s annual list of the world’s most powerful people, taking the number one spot for the third consecutive year.

The Forbes list, now in its eighth year, identifies 74 people – one for every 100 million on the planet – whose actions have the most impact across the world. Factors taken into consideration include the amount of people a person has power over, the financial resources they control, whether they have influence in more than one sphere, and how actively they wield their power to change the world.

This year, 28 members of the list serve as chief executives of major companies. The top ten of those CEOs – all of whom are American – run firms with a combined market capitalisation of $3tn (£2.4tn), Forbes reports.

Trump’s rise to second from number 72 last year is the biggest ever on the list. Other notable entries associated with him include the vice-president-elect, Mike Pence, at number 69, Rex Tillerson, the outgoing ExxonMobil chief who was selected this week as Trump’s nominee for secretary of state, at number 24, and the Blackstone Group CEO, Stephen Schwarzman, who has been appointed to Trump’s panel of economic advisers, at number 52. Several Trump donors are on the list as well, including Sheldon Adelson, the CEO of Las Vegas Sands, at number 72, and the Silicon Valley billionaire Peter Thiel at 73.

Angela Merkel, the German chancellor, remains the most powerful woman, at number 3. The British prime minister, Theresa May, is a new addition to the list at number 13, replacing her predecessor David Cameron, who was ranked at number 8 last year. Barack Obama drops to 48.

Khalid al-Falih, the oil minister of Saudi Arabia, is another newcomer at number 49, as is the Syrian president, Bashar al-Assad, at number 63. Travis Kalanick, the CEO of Uber, who drove the company to become the richest startup in history, is new at number 64, and Facebook’s Mark Zuckerberg is the youngest person on the list, at number 10.

“Forbes’s list this year of the world’s most powerful people reflects rapid and profound change happening around the globe,” said David Ewalt, Forbes contributing editor. “The biggest trend this year is likely the rise to power of Donald Trump, as well as the increasing power of his supporters and allies.”

Unfolding events in the White House, as well as those in Aleppo and Europe, including Britain’s vote to leave the European Union, have made 2016 a significant year for Putin, who has helped reshape the global landscape.

Trump, who last week was named Time’s person of the year, has continued to stoke concerns over his relationship with the Russian leader, in part by dismissing CIA reports of Russian intervention in the US presidential election.

A number of appointments by the incoming president, including that of Tillerson, have represented significant gains for Moscow, and members of the US intelligence community recently told the Guardian they even feared reprisals from Trump over their previous assessments of Russia’s hostile conduct.