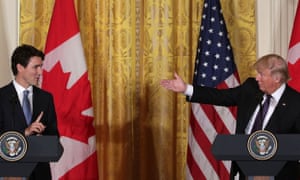 The charm offensive was already under way before Donald Trump moved into the White House. By inauguration, Justin Trudeau’s top advisers had fostered close contacts with Trump’s inner circle, setting the stage for a Washington visitpeppered with smiles, handshakes and photo ops.

But this week relations between Canada and the US seemingly struck a different note, as news broke that Ottawa had launched an all-out trade war against Washington.

In a wide-ranging complaint, filed in December and made public on Wednesday by the World Trade Organization, Canada has taken aim at Washington’s use of anti-dumping and anti-subsidy duties. The complaint listed nearly 200 cases spanning two decades, alleging wrongdoing not only against Canada but dozens of other countries, such as Brazil, China and India.

Canadian officials portrayed the filing as a clear message that Canada was standing up for its industries and workers. “When people see that you’re firm, you get respect,” François-Philippe Champagne, Canada’s international trade minister told reporters.

Looming over Ottawa message are the high stakes renegotiations of the North American Free Trade Agreement. Amid Trump’s repeated threats to pull out of the decades-old pact, the Canadian government has been scrambling to hammer out a reasonable update that would safeguard the roughly 2.5m Canadian jobs and 75% of Canadian exports tied to the pact.

Some pointed to the tough talk as a plan B by the Trudeau government. “By dropping the gloves in such a public way, Canada is acknowledging that playing nice with Mr Trump on trades has failed miserably,” noted a columnist for the Globe and Mail.

Whether the approach had yielded results was a matter of debate: while much of Trump’s rhetoric has been aimed at Mexico, his initial actions were aimed at Canada.

Trump paired these with a broad attack. “We can’t let Canada or anybody else take advantage and do what they did to our workers and to our farmers,” he told reporters in April.

The WTO complaint suggests the Trudeau government has evolved in its approach , said John Weekes, Canada’s former WTO ambassador and chief Nafta negotiator. “This is really about sending a signal to the Americans that we’re prepared to be tough.”

The timing of this signal suggests the Canadian government sees the sixth round of Nafta negotiations – slated to begin later this month in Montreal – as a vital opportunity to determine whether the US is willing to find common ground on the thorny issues such as the rules governing the auto industry and trade dispute mechanisms, said Weekes.

On Wednesday US trade representative Robert Lighthizer made clear his belief that Canada’s WTO complaint would simply exacerbate trade tensions.

“Canada’s new request for consultations at the WTO is a broad and ill-advised attack on the US trade remedies system,” Lighthizer said in a statement.“Canada’s claims are unfounded and could only lower US confidence that Canada is committed to mutually beneficial trade.”

But in the transcript of an interview with the Wall Street Journal published Thursday, Trump struck a more upbeat tone, saying that there was a chance of making a reasonable deal, and hinting his administration would be open to extending the timeline of Nafta talks.

This week saw headlines suggesting that Canada is readying for Trump’s imminent withdrawal from Nafta, but Canadian officials have long been prepared for the possibility, said Colin Robertson of the Canadian Global Affairs Institute.

Canada has shown no sign of slowing its outreach plan that has sent representatives from the Canadian government and businesses on hundreds of trips across the US to talk up trade with Canada.

“I think that conversations are still taking place between the prime minister and Mr Trump,” he said.