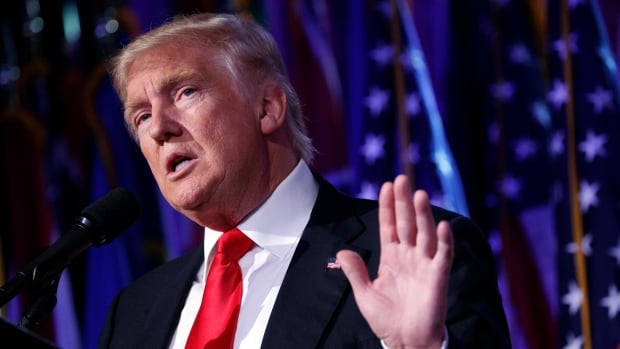 Jonathan Chait won’t go so far as to compare Donald Trump to a fascist, a Nazi or Hitler, but he claims the election of Trump to the U.S. presidency is a tragedy for the world.

In fact, it’s the “worst thing that has happened to the world in my life,” said the 44-year-old columnist for New York magazine. In the long term, he said, it will be much worse than the attacks on Sept. 11, 2001, that killed nearly 3,000 people.

Yes and yes, according to Chait.

Eliminating Obamacare itself would lead to more deaths in a year than Sept. 11, he said. And the amount of suffering and deaths that would follow by pulling the plug on the Paris climate change agreement and ignoring global warming would radically exceed those death tolls as well, Chait said.

He is certainly not alone in feeling that Trump’s surprise victory is a tragedy.

Twitter has been awash with comparisons of Trump to Hitler and the attacks on New York and Washington 15 years ago. Some have flipped the dates around, saying now that 11/9 — Nov. 9, the day after the election — is the new 9/11.

Celebrities, many of whom supported Hillary Clinton, have expressed their sorrows.

In an interview, Robert De Niro said he felt the same as he did after the Sept. 11 attacks.

Meanwhile, some U.S. universities rushed to console students who were traumatized by the results. Stanford University offered counselling and psychological services for those who needed “to talk, need support or who have short- or long-term concerns.” 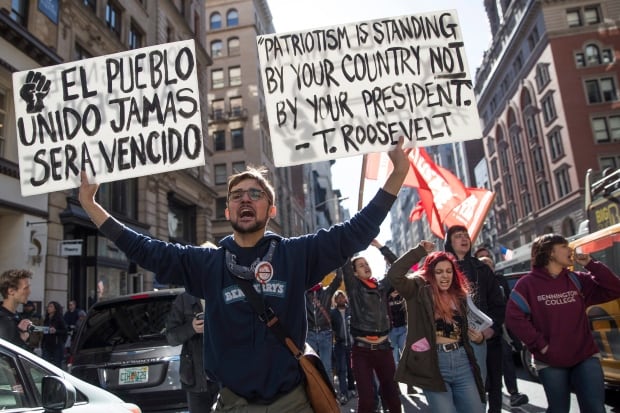 Cornell University, according to the Cornell Review,  held a “cry in” so students would be able to “hold each other, cry, and hug” and “show that we are still here, we are not erased, and we matter.”

A dorm at the University of Pennsylvania had offered anxious students a “breathing space” room that included kitties and puppies to cuddle, snacks and colouring pages.

“As a historian, one of the things I always do, I tell my students don’t overuse the word ‘unprecedented,’ said McGill University history professor Gil Troy. “I think really this time we can use it.”

As Troy points out, it’s not the first time the U.S. has reacted strongly to an election. In 1860, he noted, people were so upset by Abraham Lincoln’s election that seven states seceded. 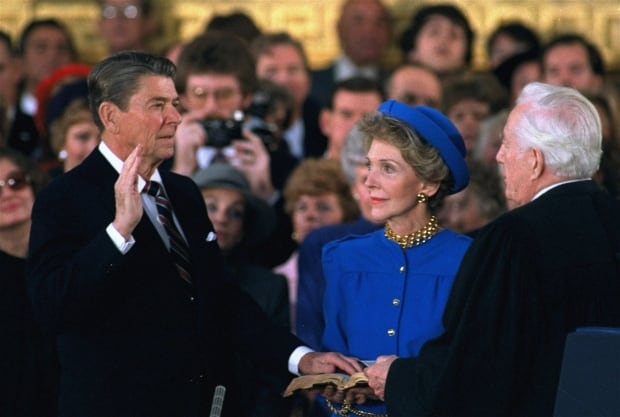 The election of Ronald Reagan in 1980 stoked fears among Democrats, many of whom were despondent at the prospect of a right-wing movie actor taking power. (Ron Edmonds/Associated Press)

But for a more modern reference, the election of Ronald Reagan stoked fears among Democrats, many of whom dismissed the former actor and were despondent that the country would be moving in a conservative direction.

“I am scared that if Ronald Reagan gets into office, we are going to see more of the Ku Klux Klan and a resurgence of the Nazi Party,” Coretta Scott King, widow of civil rights activist Martin Luther King, said in November 1980. In 1972, there was outrage and protests over the re-election of Richard Nixon.

But none of it compares with the reaction to Trump’s election. Julian Zelizer, professor of history and public affairs at Princeton University, said Americans are in disbelief that someone with so little political experience is now in power.

“It’s not simply anger, it’s not simply frustration that this went right rather than left. It’s this uncertainty about who this person is who is going to have all this influence.”

Combine that, said Zelizer, with the shock that someone in 2016 could run a campaign using the rhetoric Trump employed about different ethnic and religious groups — and win.

“This is certainly at the far end of the spectrum of how intense the feelings are,” he said.

Glenn Reynolds, a law professor at the University of Tennessee and author of the weblog Instapundit, said the “culture of hysteria” against Trump and the comparisons to Hitler will only backfire against his opponents.

“So if I’m Trump, I’d actually love that,” he said. “Because first of all, it makes my opponents look stupid and flighty. And second of all, it means that all I have to do to succeed is not be Hitler. You’re setting the bar really low, and how smart is that?”

Reynolds, who’s no fan of Trump, recently penned an article for USA Today condemning universities for offering support services to students after the election.

“When universities say the election of Trump is so traumatic that we’re basically going to let people grieve and get counselling like we would after a terrorist attack, you’re taking sides.”

Reynolds said the reaction is all part of an overall trend of “infantilizing” college students.

Some Trump supporters say the reaction to the election is somewhat akin to so-called Bush derangement syndrome. 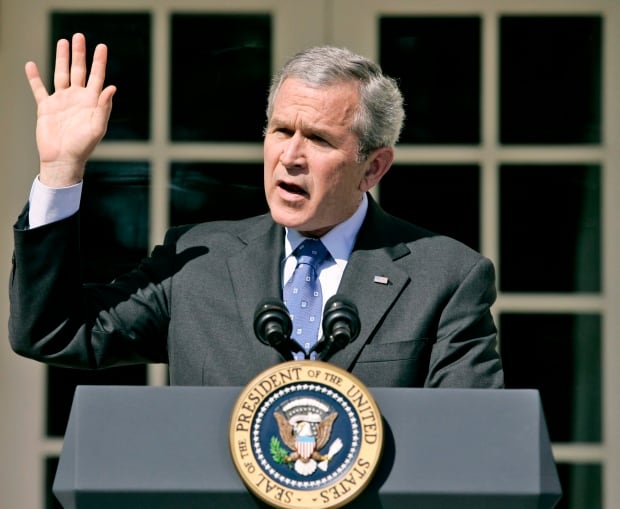 The term, coined by conservative columnist Charles Krauthammer, described “the acute onset of paranoia in otherwise normal people in reaction to the policies, the presidency, nay, the very existence of George W. Bush.”