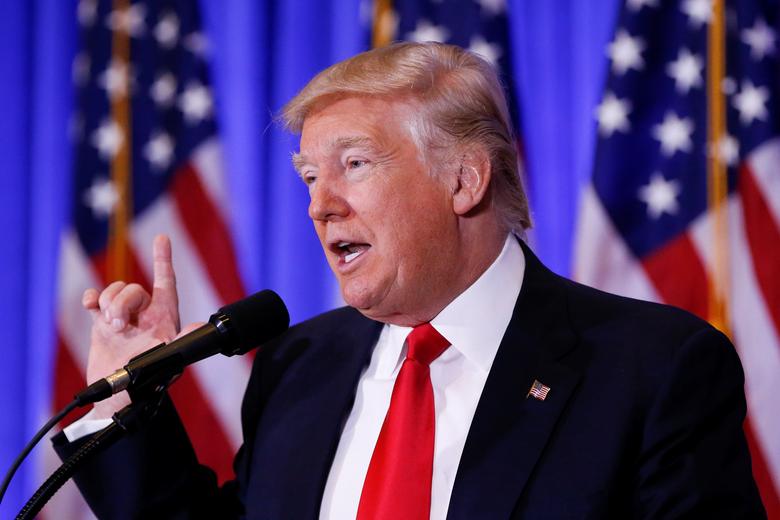 In his first news conference since the Nov. 8 election, President-elect Donald Trump set social media ablaze on Wednesday with remarks including harsh criticism of the press and a defense of his goal to improve ties with Russia.

The session, held in the lobby of his Trump Tower headquarters in Manhattan, featured a number of viral moments, like an exchange with a reporter whom Trump accused of peddling “fake news.”

“I’m not going to give you a question,” Trump told the journalist from CNN, which reported on Tuesday that the Republican president-elect had been briefed by U.S. intelligence agencies about allegations that Russian operatives had compromising information about him.

“You are fake news!” he told the reporter in a moment that reverberated on Twitter.

Trump’s comment that reporters were “the only ones who care” about whether he released his tax returns stirred up 165,000 tweets during the session. Social media users asked others to “retweet if you’re not a reporter and still care about seeing Trump’s tax returns.”

In Russia, the hashtag #TrumpPressConference was a top-trending topic during the news conference and for several hours afterward.

“If Putin likes Donald Trump, I consider that an asset, not a liability because we have a horrible relationship with Russia,” Trump, who takes office on Jan. 20, said in reference to the Russian president.

“I don’t know that I’m going to get along with Vladimir Putin. I hope I do. But there’s a good chance I won’t,” Trump said, prompting thousands of tweets from people in Russia.

There were some 80,000 tweets worldwide stamped with the #TrumpPressConference tag during the hour-long session with about 250 reporters.

Twitter sentiment regarding Trump during the event was 14 percent positive, 63 percent neutral and 23 percent negative, according to global digital marketing technology company Amobee.

Also stirring Twitter reaction were Trump’s comments about the wall he has pledged to build on the U.S.-Mexican border and to have Mexico pay for.

He said he would not wait for negotiations with Mexico before beginning construction, but added: “Mexico in some form … will reimburse us.”

“Neither today, nor tomorrow nor never Mexico will pay for that stupid wall.”