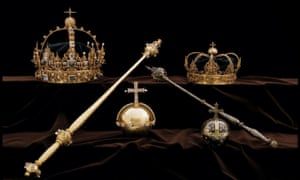 Police in Sweden are hunting for jewel thieves who stole two priceless royal crowns and an orb from a cathedral before making their escape in a motorboat.

The audacious heist at the historic, hilltop Strängnäs Cathedral took place at about midday on Tuesday. The cathedral was open to visitors at the time and a lunch fair was being held in a side chapel.

The crowns and orb were used by the 17th-century King Karl IX and Queen Kristina. They are made of gold and enamel and encrusted with beads, crystals and pearls.

They were stolen from a locked and alarmed display cabinet in the Gothic-style cathedral, which lies 60 miles west of the capital, Stockholm. There has been no confirmation from police, but the assumption is that the thieves could have got to the items only by smashing the glass, which would have triggered the alarm.

Tom Rowell, who is getting married in the cathedral next week, told Aftonbladet he saw two men run from the building, jump into a small white motorboat and speed away.

“We contacted the police and told them and they told us that something had been taken from the cathedral,” he said. “I knew immediately they were burglars because of the way they were behaving. It’s despicable that people would steal from a holy building and a historical building.”

There were no threats by the thieves or any acts of violence and no one was injured, Aftonbladet reported.

The motorboat was waiting at the foot of the hill on Lake Mälaren, police said.

It is believed the thieves fled via the vast system of lakes west of Stockholm. Police mobilised a huge search operation with a helicopter and boats to try to find the men and recover the items, but they have so far been unsuccessful.

The thieves, who have not been identified, and the jewels are being sought internationally via Interpol. A Swedish police spokesman, Stefan Dangardt, said the objects were national treasures and would probably be very difficult to sell.

Thomas Agnevik, another police spokesman, told Aftonbladet: “It’s 1-0 to them right now. We want to spread information and pictures of these items so that they can be identified as stolen objects.

“It’s too difficult to translate these things into some kind of value. They are such unique objects. What usually happens with this type of object is that they are recovered sooner or later, because there are very few people who are prepared to handle them. We have high hopes of getting them back.”

Catharina Fröjd, who works at Strängnäs Cathedral, called the theft “an enormous loss in cultural value and economic value”.

In 2013, a crown and sceptre used in the funeral of Sweden’s 16th-century King Johan III were stolen from Västerås, another city on the shore of Lake Mälaren. They turned up a few days later in two large rubbish bags at the side of a highway after a tip-off to police.

The perpetrators of Tuesday’s heist risk up to six years in prison for aggravated theft.