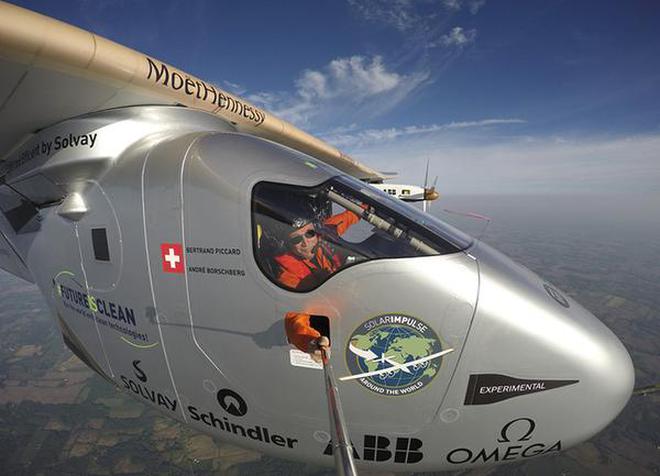 His keen blue eyes light up when you speak about clean technologies. Meet Swiss aviator Bertrand Piccard, whose paternal lineage of explorers led him to attempt the seemingly impossible task of flying without fuel. At the recently concluded U.N. climate summit in Marrakech, Morocco, where he unveiled a World Alliance for Clean Technologies, he narrated the story of co-piloting the first solar-powered flight, the Solar Impulse, around the world. The aircraft uses 17,000 solar cells and has flown 40,000 km in its first round-the-world trip, which concluded in July, 2016. With the International Civil Aviation Organisation leading the adoption of the historic agreement to mitigate greenhouse gas emissions in the sector this October, such experiments could show the way in ‘greening’ commercial aviation, he says.

When was the first time you thought you could fly without fuel? Tell us a bit about your journey.

I was born and raised in the world of exploration. My grandfather made the first flight in the stratosphere. He, Auguste Piccard, invented the pressurised cabin. He demonstrated that man could fly in thinner air where fuel required for aviation would be lower. Then my father built the submarine. He explored the bottom of the deepest trench in the Pacific Ocean, the Mariana trench, and showed that there was life down there. This was at a time when the government wanted to dump radioactive waste there. So, due to my ancestry, I always had this vision of scientific exploration.

My first major experiment was to fly non-stop on a balloon. So, the first flight I made around the world was through the wind. But for that I had to burn a lot of propane gas.

I decided the next time I had to do it without fuel. That is when I thought of flying using solar power. It was a crazy dream in the beginning, but it worked (chuckles).

In 2003, Andre Borschberg and I conducted the feasibility study for this at the Swiss Federal Institute of Technology. I asked Andre to lead the project and we got off.

Can you describe the actual flight experience?

We started in 2015 from Abu Dhabi. Then we flew to Oman, India, Myanmar, China, Japan, Hawaii, and U.S, Spain, Egypt and back to Abu Dhabi…. It was 23 days of actual flight but spread over a year and a half. We had to stop in between for the weather to clear. It was very difficult. We had no benchmark, nobody to help us. You have to imagine an aeroplane that has a 72-metre wing span – it is wider than the jumbo jet, Boeing 747. It flies powered by the sun. The sun powers it through the day to load the batteries. The motors had 97 per cent energy efficiency. And the batteries were efficient enough so we could make it through the night when the sun was not available. And we flew only one person at a time. At every stop, we changed the pilot. It was just Andre Borschberg and me.

The current planes in use are not built to conduct such a mission. How did you put together the aircraft for this experiment?

The world of aviation did not believe in it; that such a plane could be made. So, they did not help us. We found a shipyard in France where they knew how to use carbon fibre, a very light material in an efficient way. So the big pieces of the aeroplane were built by a shipyard, using very light carbon fibre pieces; light enough. We had our own engineers design and assemble the plane. The first prototype took two years of construction. The design and the concept were developed entirely by our team. Then the second aeroplane was constructed, which actually flew all over the world, and that also took two years of construction.

The solar panels are on top of the plane. The entire plane is covered by the panels.

How exactly is this plane different in structure from other planes flown today?

Solar Impulse is completely revolutionary. It has got perpetual endurance. No refuelling needed. The sun gives enough energy to charge the batteries. However, in places where the rays of the sun are not very strong during the day one cannot fly. It is at an experimental stage right now. Our goal was to simply establish what clean technologies could achieve if we wanted. I think we achieved that. Two weeks before I landed in Abu Dhabi for the last leg of the flight, NASA and Airbus announced that they will be launching the first electrical flight programme.

Do you feel commercial aviation can imbibe some of these technologies to improve energy efficiency and reduce its carbon footprint, especially since the ICAO has now agreed to cut emissions?

It is possible to reduce the carbon footprint of commercial aviation. The first thing is to make aeroplanes lighter so they can use less energy. Then, you need more direct flight routes. You need to have aeroplanes pulled on the tarmac and the taxiway with electric tractors. It’s clear that you cannot have aeroplanes taxiing on their own power with jet engines. It’s ridiculous. You lose so much of energy, so electrical tractors is a good solution. So there are a lot of ways to reduce energy usage in modern aeroplanes.

Another thing is not all the solar technology we use needs to go to commercial aviation alone; it could go to electric mobility, and it can insulate houses. You can have LED lighting, heat pumps, and smart grids. In India, ABB, one of our partners, is installing micro-grids to supply energy for irrigation and lighting systems. All this is profitable.