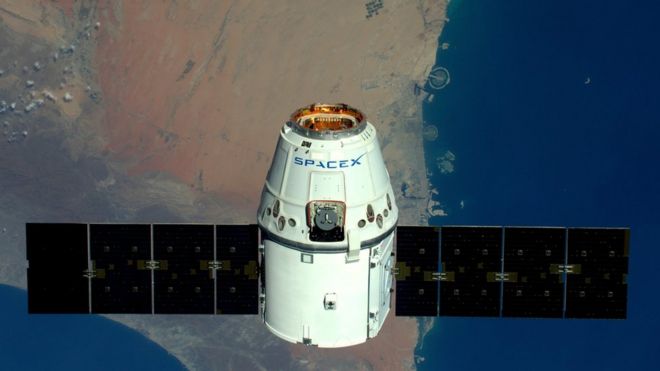 In a filing to the US Federal Communications Commission (FFC), it laid out details about its plans for a 4,425-strong satellite network.

It is one of several companies aiming to deploy satellite-based internet services over the next few years.

SpaceX suffered a setback in September when a rocket exploded.

In a statement, the firm said: “Once fully deployed, the SpaceX system will pass over virtually all parts of the Earth’s surface and therefore, in principle, have the ability to provide ubiquitous global service.”

The satellites would orbit the planet at altitudes ranging from 714 to 823 miles (1,150 to 1,325 km). That is above the International Space Station but below geostationary satellites.

SpaceX has talked about its telecoms ambitions for a while.

Now, under a deadline to file interest with the FFC, the company has given a moretechnical glimpse of its proposal.

It is understood SpaceX has some prototype satellites it will launch next year, but the actual constellation will not see the light of day until the turn of the decade.

SpaceX is by no means the only group looking to make a pitch in this market. Established satellite communcations big-hitters such as Intelsat (OneWeb), SES (O3B), Telesat and Boeing are at various stages in their own development plans.

It used to be that “constellation” was a dirty word after the initial attempts at building sat phone networks in the 1990s filed for bankruptcy, unable to pay back huge loans. But the wind has changed.

Connectivity drives the global economy and with the coming “internet of things”, there is a feeling that these mega-networks in the sky will prove profitable. Not for all, but perhaps for those able to move quick enough and get their constellations launched. And SpaceX’s main business is launching satellites.

Elon Musk, the founder of SpaceX, announced last year that the service would be “larger than anything that has been talked about to date” adding that it would take about $10bn (£8bn) to get it off the ground.

The latest documents did not include costs.

It suggested that the first 800 satellites would be used to expand internet access in the US, including Puerto Rico and the US Virgin islands.

Each satellite, about the size of an average car, not including solar panels, would weigh 850 pounds (386kg), the firm said.

SpaceX rocket launches have been on hold since September following an accident that destroyed a $62m Falcon 9 booster and a $200m Israeli communication satellite. The firm hopes to resume flights next month.