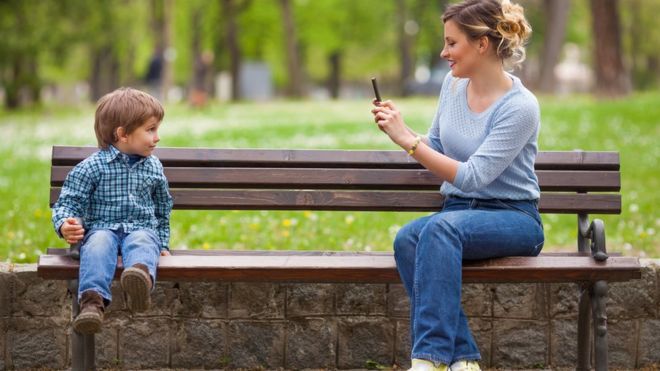 Parents from Shanghai to Chicago are proudly putting pictures of their children on social media.

It might be taken for granted – but no previous generation of children will have had the experience of having their entire childhoods intensively and publicly documented in this way.

In the UK, the average parent with a social media account has posted 1,498 photos of their child online by their fifth birthday, according to a survey by domain name company, Nominet.

This might be a global phenomenon for proud parents – but what about the children, who will have been too young to have any choice in the matter.

But the very first people to have had some of their childhood pictures posted online are now reaching adulthood. And they are not always happy about their formative years being preserved in digital aspic.

“When I was 12 or 13 I started realising there were things [on Facebook] that I thought were a bit embarrassing,” said 16-year-old Lucy, from Newcastle, whose dad has been posting pictures of her on the social networking site since she was seven.

“I asked him to take them down and he was happy to, but he didn’t quite understand why. If I had been asked [at the time], do you want these photos out there for all to see, I would’ve probably said no.”

Even those who were pleased to be on social media as children are less sure about it now. Dana Hurley, 20, from east London, said that as an 11-year-old she was happy for her parents to post photos of her on Facebook.

“At the time it was exciting… I liked attention. Now it’s kind of weird because you look back and think, this was for everyone to see,” she said.

She has de-tagged herself from most of her childhood photos online, meaning that the pictures do not show up on her profile, though they are still on the site.

Parents may not realise it, but by posting photos and videos of their children online, they are creating an identity for their children that might not be welcomed, according to psychologist Dr Arthur Cassidy, who specialises in social media.

“One of the major arguments is, do parents have the right to assume control over their child’s identity?” he said. “They believe, this is our child, we own their identity. But children believe they can change and control their identity online.”

Lucy is a good example. She said she had asked her dad to de-tag her from “stuff that doesn’t necessarily represent who I am now.”

“It was never a big issue or anything bad, just stuff I preferred people didn’t see,” she said. “There were photos my dad posted of me in Year 6 and Year 7 [aged 11 and 12]. Back then I was quiet and shy, I didn’t really have lots of friends.

“That’s not necessarily where I am now, and it’s not something I’d want to remember every time I log on to Facebook… It isn’t the best memories, which is the way you’d like to portray yourself on social media.”

But Francesca Ivaldi, 21, from south London, said growing up online had its upsides – such as staying in touch with family around the world and creating an easy-to-access record of happy memories. Her Facebook profile includes pictures of her from the age of 13 onwards.

More stories from the BBC’s Global education series looking at education from an international perspective, and how to get in touch

“My family are across the globe,” she said. “It’s a nice way to document things. You could see it as, that’s amazing, I’ve got this entire backlog. You can look back on it and have a really nice timeline.

“But it depends how you see it… Some people think, I can’t believe that, it’s so embarrassing.”

Stories about online privacy are often about children and teenagers being warned of the dangers of publishing too much personal information online. But in this case it’s their parents who are in the spotlight.

“Parents are very careful of saying to their kids, think about what you’re putting online,” said Justine Roberts, founder and chief executive of the parenting website Mumsnet.

“I think the [idea that] actually you’re posting about someone else, is less discussed on Mumsnet.

“I think it’s because parents are thinking, they’re not going to put deeply revealing or difficult pictures of their children up. Nonetheless, they’re still putting pictures out there.”

Parents had no “natural instinct” about what would be the right level of pictures on social media, she said.

“We uniquely do not have an insight into being that teenager and having a body of pictures that are out there already,” she said.

“We haven’t woken up and thought, I wish my mum hadn’t put those embarrassing baby pictures up.”

For some parents, the safest option is avoiding social media altogether.

Kasia Kurowska from Newcastle is expecting her first child in March and has agreed with her partner Lee to impose a blanket ban until her child is old enough to make their own decisions about social media.

“The idea that you’re documenting their whole life before they get a chance to decide if they want it on there, just doesn’t sit quite right with me and my partner,” she said.

“Children are their own people, and sometimes we can forget about that.”

But she has two big concerns about her plan. Firstly, it will be difficult to impose. “At parties, or when their auntie comes round and wants to take a picture, we’re going to have to be like paparazzi police, saying, please don’t put these on Facebook. People will think we’re right humbugs.”

And secondly, the child might resent not having an online presence, especially if all of their friends do.

“I do have a concern that I’ve over-thought it and they’ll come to me and complain that they don’t have a record on social media of their lives,” she said.

“But I will have a digital record of them. It just won’t have been shared on a platform for the masses.”