Home
World News
Safe, happy and free: does Finland have all the answers? 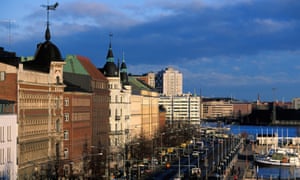 Western Europe’s last naturally caused famine ended 150 years ago this winter. In a poor and backward part of the Russian empire called Finland, more than a quarter of a million people – nearly 10% of the population – starved to death.

Last year, on the centenary of its independence, Finland was ranked, by assorted international indices, the most stable, the safest and the best-governed country in the world. It was also the third wealthiest, the third least corrupt, the second most socially progressive and the third most socially just.

Finland’s judicial system is the most independent in the world, its police the most trusted, its banks the soundest, its companies the second most ethical, its elections the second freest, and its citizens enjoy the highest levels of personal freedom, choice and wellbeing.

The Nordic country’s 5.5 million inhabitants are also the third most gender-equal in the world and have the fifth lowest income inequality. Their babies are the least underweight, their kids feel the most secure, and their teens perform the second best at reading (only third at science, though).

In a century and a half, they seem to have done rather well. And so, as the Guardian embarks on a new series investigating the things that are going right in the world, it feels natural to start in Helsinki.

“If you look at where we were then and where we are now, I think, absolutely, you can talk about a Finnish miracle,” said Bengt Holmström, a Helsinki-born Nobel prize-winning economist not much given to exaggeration. “How and why did it happen? Now that’s a question.”

There are limits, of course, to the usefulness of this kind of exercise: no two countries – their circumstances, their histories, their people – can be the same. Learnings may not be transferrable. The magic sauce that made Finland would not produce the same results in, say, France.

It is true, too, that shown the long list of social and economic measures by which their country can only be judged a success, many Finns snort: emerging slowly from a long recession, with unemployment at 8% and a populist, nationalist party garnering up to 20% of the vote, the country’s not what it was, they say. Often, the response – only semi-joking – is, “You mean other countries are worse?”

But inquiring after the sauce’s recipe of, among others, an economist, a philosopher, a sociologist and an ex-president, intriguing ingredients emerge.

To begin with, the geography – and its consequence, the climate. “We live,” Tarja Halonen, Finland’s president from 2000 to 2012, says carefully, “in a cold, harsh and remote place. Every person has to work hard for themselves. But that is not always enough. You have to help your neighbours.”

Bruce Oreck, who served as Barack Obama’s ambassador to Helsinki (he liked it so much he stayed), says this has been “a profound, long-term influence. It’s made Finns self-reliant, private, but also dependent on a highly cooperative society, where rules matter. It’s cultural, but it’s become part of the chemistry.”

Of all the Finnish words that are hard to translate into English, the one Finns cite most is sisu: a kind of dogged, courageous persistence regardless of consequence. It is what, in 1939-40, allowed an army of 350,000 men to twice fight off Soviet forces three times their number, and inflict losses five times heavier than those they sustained.

But there is another that is, perhaps, more revealing, says Sirpa Kähkönen, an award-winning historical novelist. Talkoo means “working together, collectively, for a specific good”, she says. “Getting the harvest in, stocking wood, raising money. It’s about cooperating. Everyone together, equally.”

Cooperation, but also relative equality, are recurring themes. Ruled for almost 600 years by Sweden and a further century by Russia, Finland was “generally and democratically poor”, says Kähkönen. “There were no serfs, but no wildly wealthy aristocrats either. Society was not hierarchical.”

Since long before independence in 1917, says Riitta Jallinoja, a sociologist, “gaps between the social classes in Finland have been smaller than usual. Even the industrial revolution here was modest: no Rothschilds, no Fords, not even a dynasty like Sweden’s Wallenbergs.”

Even in today’s clean, functional, visibly prosperous Helsinki, that still sort of holds. “You can be walking down the street next to the richest guy in town, and you really wouldn’t know,” says Oreck. In Finland, insists Halonen, “You don’t look up at people, and you don’t look down. You look level.”

The country’s most successful current firm, games studio Supercell, creator of Clash of Clans, paid over €800m in tax, producing seven of Finland’s top 10 income tax payers in 2016. Along with the rest of the country’s highest 10,000 or so highest earners, the amount they pay is published in an annual list, on “national envy day”. Finland is big on civic duty, but also on transparency.

The success of the country’s free national education system, established before independence in 1866 and regularly ranked among the world’s best, also has its roots in a more egalitarian society, says Jallinoja: “Education was the key to advancement.”

Not only that, says the philosopher and professor emeritus Ilkka Niiniluoto, but the whole country is actually “a social construction created by university professors.” The academics who led the country’s nationalist movement “created Finland as a nation: its language, history, literature, music, symbols, folklore. The nationalist leader was a philosophy professor.”

Since independence, nearly 30% of Finland’s heads of state and government have been university professors, including half its early prime ministers. “They shaped the country as we know it,” says Jallinoja. “But vitally, they also created confidence in social mobility, and real belief in education. That history comes with us.”

If, however, Finland has been rated the world’s most literate country, it may also have something to do with a 19th-century decree that a couple could not marry in the Lutheran church before both passed a reading test. “Quite an incentive,” observes Halonen, “to learn to read.”

Gender equality, similarly, was baked in. In 1906, Finnish women became, if not quite the first to win the vote, the first to run for electoral office. Nearly 10% of MPs in Finland’s first parliament were women (the figure is now 42%); as early as 1930, up to 30% of university students were women. “Women in Finland took their rights seriously, and men accepted it,” says Halonen.

Other ingredients have since added to the sauce. Finland benefited enormously from wise wartime and postwar leaders, insists Holmström: “They thought about the good of the country; took big, sensible decisions. And the consensus backed them, because everyone knew we were fighting for our existence.”

Responsible choices were made, invariably by continuity-conscious coalition governments, on big industrial and infrastructure investments, that have paid dividends many times over. More recently, today’s high-tech, startup-friendly Finland was born of record investment in research and development in the 1990s, nearing 4% of GDP.

Steady growth – through war, the collapse of the Soviet Union and a deep recession in the 1990s, Finland’s economy has expanded over the past century at a rate equalled only by Japan’s – has bolstered trust in the nation’s institutions. “People criticise the government constantly, and often for very good reason,” says Kähkönen. “But fundamentally, they do trust it.”

As they do, on the whole, their welfare state – on which Finland spends 31% of its GDP, the second highest proportion in the OECD. (“If you’re going to have a welfare state,” says Halonen, “the only real way to it is so well that there’s no point having a private alternative.”)

But Finns also trust each other more than most, says André Chaker, a Canadian-born lawyer and public speaker who has lived in the country for 25 years. Corruption and organised crime are all but nonexistent. “That feeds into the business environment,” he says. “Things get done here faster, more reliably.”

And it is trust that breeds confidence, and a willingness to innovate: the World Economic Forum ranks Finland the most innovative country, per capita, in the world. For years dominated by monolithic mining and forestry firms, then by the once-mighty Nokia, Finland today is close behind Silicon Valley in the number of startups per head.

The magic sauce, then, seems based mainly on basic virtues: self-confidence, cooperation, equality, respect for education, trust. At bottom and in practice, says Anu Partanen, a Finnish journalist who now lives in New York, it boils down to a different quality of relationship. She calls it – since it is shared to a greater or lesser extent by Sweden, Norway and Denmark – the Nordic theory of love.

“In the family, it’s realising that relationships can only really flourish between individuals – parents, children, spouses – who are equal and independent,” Partanen says. “In a society, it means policy choices aimed at ensuring the greatest possible degree of independence, freedom and opportunity for everyone.”This article is part of a series on possible solutions to the world’s biggest problems. What else should we cover?