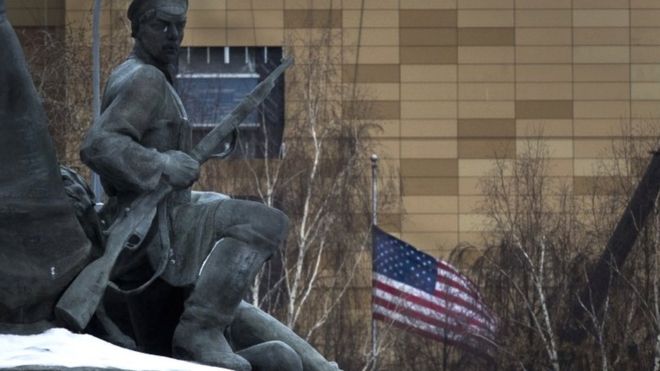 Russian President Vladimir Putin has ruled out a tit-for-tat response after the US expelled 35 Russian diplomats amid a row over hacking.

He said Russia would not “stoop” to the level of “irresponsible diplomacy” but would work to restore ties with the US under President-elect Donald Trump.

The country denies involvement in hacking related to the US election, calling US sanctions “ungrounded”.

What are the luxury Russian compounds?

Under the US action taken on Thursday:

Mr Obama, who will be replaced by Donald Trump on 20 January, had vowed action against Russia amid US accusations that it directed cyber-attacks on the Democratic Party and Hillary Clinton’s campaign.

Emails stolen from her campaign manager and from the servers of the Democratic National Committee – some containing embarrassing information for Democrats – were released during the election campaign.

This was a carefully stage-managed response from Mr Putin – dangling the possibility of tit-for-tat expulsions and then showing magnanimity in postponing any response – at least for now.

It is fundamentally a put-down for the Obama administration, suggesting that, in Moscow’s view, it is such a lame-duck, so irrelevant, as to make any response unnecessary.

It also poses an immediate test for President-elect Trump. Will he be convinced by the evidence the US intelligence agencies say they have? And, if so, what course will he steer in his relations with Russia?

This is no new Cold War. Russia is simply a kind of “pocket” superpower, nothing like the Soviet Union of old. But Mr Putin has shown here in relations with the West, as in Ukraine and Syria, that he can play a limited hand with great skill. Mr Trump will need to respond to this challenge in a decisive but graduated way.

‘Come to the tree’

In a statement on the Kremlin website (in Russian), Mr Putin said: “We won’t be expelling anyone.

“We won’t be banning their families and children from the places where they usually spend the New Year holidays. Furthermore, I invite all children of American diplomats accredited in Russia to the New Year and Christmas Tree in the Kremlin.”

He wished Barack Obama and his family a happy New Year, as well as Mr Trump and “the whole American people”.

In a message on the presidential website, Mr Putin said that, with the accession of Mr Trump, “the two states, acting in a constructive and pragmatic manner, can take real steps for restoration of mechanisms for bilateral co-operation”.

President-elect Trump has dismissed the hacking claims as “ridiculous” and said Americans should “get on with our lives” when asked previously about the possibility of sanctions.

However, he said late on Thursday he would meet US intelligence chiefs next week to be “updated on the facts of this situation”.

Russia’s foreign ministry had reportedly suggested expelling 31 US diplomats from Moscow and four from St Petersburg.

It also suggested banning US diplomats from their dachas (holiday homes) in Serebryany Bor near Moscow and a warehouse on Moscow’s Dorozhnaya Street.

Russia is sending a special plane to the US to fly home its diplomats.

The move followed reports that they were struggling to buy plane tickets because flights were full ahead of the New Year holiday.

Russian foreign ministry spokeswoman Maria Zakharova has denied a report by CNN that Moscow is shutting down a school attended by diplomats’ children.

She said it was a “lie” that the Anglo-American School faced closure as retaliation.

Meanwhile, the Russian embassy to the UK tweeted a visual gag calling the Obama presidency a lame duck.

Pavel Felgenhauer, a Russian military affairs analyst, told BBC World Service things were going to get “very nasty” from here on in.

But US Democrat Senator Amy Klobuchar, who is currently on a visit to the Baltic states, told the BBC it would have been a mistake for the US not to respond to the hacking.

“This is something that is not just about American democracy, it’s about all democracies,” she said. “There’s upcoming elections in Germany and France and for the US just to roll over and to let this happen with no response would have been a huge mistake.”

US intelligence agencies, including the FBI and CIA, concluded that the aim of the hack was to cause damage to Mrs Clinton and the Democrats and favour Mr Trump.