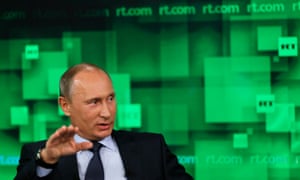 The UK bank accounts of Russian TV broadcaster Russia Today have been shut down, its editor-in-chief has said, in a move that the UK government appears to have been aware of.

In a tweet in Russian Margarita Simonyan said that “all the accounts” had been closed in the UK. She said the decision was final, adding sarcastically: “Long live freedom of speech!”

The channel received a letter from NatWest bank, Simonyan said, that read: “We have recently undertaken a review of your banking arrangements with us and reached the conclusion that we will no longer provide these facilities.”

The bank said the entire Royal Bank of Scotland Group, of which NatWest is a part, would refuse to handle RT. According to Simonyan, the letter said the decision was final and that it was “not prepared to enter into any discussion in relation to it”. NatWest said the station’s accounts will be closed down by 12 December.

Treasury sources said the bank had taken its decision independently. “It’s up to banks to decide,” one said. The source said the UK government has not introduced any fresh sanctions or “obligations” against Russia since February 2015.

NatWest said it was working on a comment. The move – if confirmed – casts into doubt the ability of the Kremlin-backed news channel to carry on broadcasting. RT said on Monday it would continue operating.

The US and Britain said on Sunday that they were considering fresh measures and possible further sanctions against Moscow in protest at Russia’s continuing bombardment of civilians in eastern Aleppo, Syria.

Maria Zakharova, a Russian foreign ministry spokeswoman, wrote on Facebook: “It looks like, as it leaves the EU, London has decided to leave behind all its obligations towards freedom of speech. As they say, best to start a new life without bad habits.”

Russia Today – now rebranded as RT – was set up a decade ago, initially with the goal of giving foreigners a positive view of Russia. In time, the idea shifted and the channel became more about painting a negative picture of the west.

The channel was rebranded to distance itself from the Kremlin and from the very idea of Russianness, and launched amid pomp in the UK and US, accompanied by major advertising campaigns asking people to “Question More” and positioning itself as an alternative to the “mainstream media”.

In 2013, at the opening of RT’s new studios, Russia’s president, Vladimir Putin, told Simonyan that the aim of the channel had been “to break the Anglo-Saxon monopoly on global information streams”. The mission had been completed successfully, Putin said.

Often, questioning more meant wallowing in conspiracy theory, giving airtime to 9/11 truthers and other basement bloggers. Away from the lunatic fringes, the channel often covered the same kind of stories in the UK and the US as the Guardian might. It focused on injustice and official malpractice, on social tensions and political demonstrations. Especially in the US, the channel built up a following for touching the kind of issues that many mainstream networks did not.

It ran a chatshow hosted by WikiLeaks founder Julian Assange, and it lured veteran US broadcaster Larry King to the channel to make a series of shows. While making marquee signings to boost its mainstream credibility, the channel also ran shows like The Truthseeker, which claimed “every single terrorist attack in US history was a false flag operation”.

During the annexation of Crimea, RT did not report on the Russian soldiers deployed on the peninsula, and complained about “misinformation” from western media outlets, which said that they were present.

Putin himself later admitted as much, but the channel’s skewed coverage of events in Russia’s backyard also gained a small but devoted following abroad. It has portrayed Russia’s military intervention in Syria as a campaign against terrorists, and reflects Moscow’s official position that no civilians have been killed by Russian jets.

Simonyan visited Assange in the Ecuadorian embassy during a trip to London in 2014.

In a statement on Monday RT struck a defiant tone, calling the decision “incomprehensible” and “without warning”. It added: “It is however not at odds with the countless measures that have been undertaken in the UK and Europeover the last few years to ostracise, shout down, or downright impede the work of RT.”

Since RT started broadcasting in the UK about 10 years ago, Ofcom has recorded breaches of the UK broadcasting rules on 20 occasions. It was investigated in Aprilfor accusing the Turkish government of genocide against the Kurds.

David Clarke, a former Foreign Office adviser and the chair of the Russia Foundation, said the BBC’s office in Moscow would now be “in the frontline” for possible Kremlin reprisals.

“The BBC is the flagship British broadcaster. It’s a public body but in the Russian mind it’s an arm of the state and they will see it as a proxy. They will look at kicking British journalists out of Russia, I guess.”

Clarke said the Kremlin used RT not for straight propaganda purposes but “information warfare”. “The clue is in the strapline: ‘Question more’. They are trying to sow confusion and to create a climate of intellectual pessimism and nihilism by mixing the genre of news and outright fabrication.”

He added: “The channel is designed to undermine rational debate. It’s a multi-layered thing and just one instrument they use.”