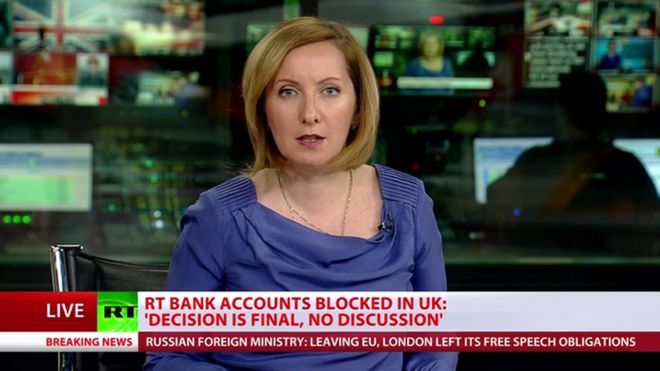 Margarita Simonyan tweeted: “They’ve closed our accounts in Britain. All our accounts. ‘The decision is not subject to review.’ Praise be to freedom of speech!”

RT says the bank gave no explanation for its decision.

It said the entire Royal Bank of Scotland Group, of which NatWest is part, was refusing to service RT.

The broadcaster, previously known as Russia Today, says NatWest wrote to its London office saying: “We have recently undertaken a review of your banking arrangements with us and reached the conclusion that we will no longer provide these facilities.”

The bank said its decision was final and it is “not prepared to enter into any discussion.”

A letter posted online by the channel appears to show that the freeze is not in effect yet. It warns that banking facilities will be “cancelled and closed” on 12 December.

Ms Simonyan said the closure included the personal accounts of some senior RT staff working in the UK.

“They have failed to defeat us by simply vilifying us, by picking on our broadcast, so they decided to try the banking flank: ‘Try broadcasting when all your accounts have been closed.’ Yet we will try.”

RT, which is run by the Kremlin, has previously been sanctioned by UK broadcasting regulator Ofcom for biased reporting.

This included claims that the BBC “staged” a chemical weapons attack for a news report on Syria.

The BBC won a case against the TV channel after complaining to Ofcom, saying the allegations made in a programme called The Truthseeker were false and struck “at the heart” of its obligations to accuracy and impartiality.

Ofcom ruled that elements of the programme were “materially misleading”.

Russian media outlets have made inroads into the UK recently.

The state-funded Sputnik news agency set up in Edinburgh in August to broadcast live radio programmes from Scotland. It said its goal was “telling the untold” to Scottish and UK audiences, although critics say it will act as a Kremlin mouthpiece.