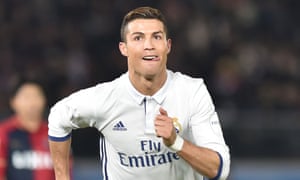 ET 119 min A couple of minutes left and the Kashima fans will bounce and chant their way through them..

ET 116 min Naomichi Ueda (of pre-match crocodile fame) blocks Morata’s shot on the line to deny what would have been a sensational goal. The striker weaved in and out on a long dribble, leaving defenders lying on the ground before pummelling a shot past the keeper Sogahata but Ueda did well to get back.

ET 113 min Kovacic injects a little pace into a tired game and wins a foul in Kashima’s half. Akasaki replaces Nagaki.

ET 111 min Ronaldo trots off and is replaced by Álvaro Morata.

ET 108 min Sergio Ramos hands the captain’s armband to Marcelo and is replaced by Nacho.

half gets under way. Kovacic replaces Modric and almost immediately puts Ronaldo in on goal, but Sogahata comes out of goal to intercept.

Had Yuma found the back of the net instead of the meat of the crossbar we could be looking at a thrilling finale, but instead it looks like being Real and Ronaldo’s night.

Kroos’s shot is scuffed into the path of Ronaldo in the box who quickly shifts the ball from under his feet before slamming in his hat-trick. It’s a brilliant reaction from the forward and finally Real have surely shaken off Kashima for good.

ET 101 min Crossbar! Shibasaki delivers the free-kick and Yuma slams a header on to the bar from six yards. Kashima should be level again!

ET 99 min Mu shows a lovely touch of skill to shimmy away from Casemiro and draw a foul. The Madrid midfielder is booked and Kashima will have a free-kick wide on the left.

And just like that Real lead. Benzema drops deep, turns, and slides Cristiano Ronaldo into the area who hits a quick shot low past Sogahata.

ET 95 min Fabricio suddenly leads a break and is one on one with Casemiro but can only win a corner from the midfielder – which Navas catches.