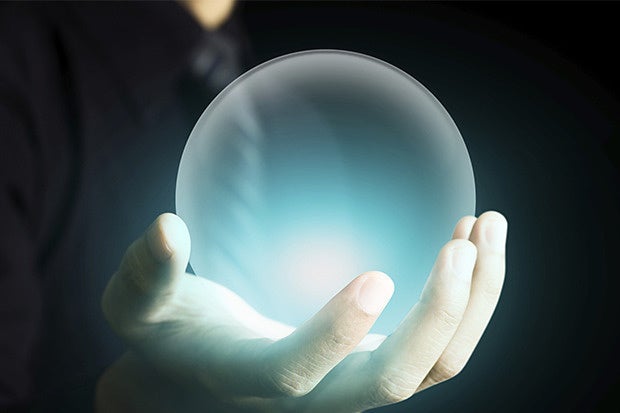 Google wants you to keep using Google. So to keep your interest, it’s working hard to apply some of the world’s most advanced technologies to making your online activities faster and easier.

It’s attacking from several angles. One of them is prediction. Google is figuring out how to guess what you’ll want to do, then making that prediction available as an instant option.

This predictive power will transform how employees and executives in enterprises and other businesses operate. The predictive internet will do for work what self-driving cars will do for transportation.

Google is beta-testing a new tool called Reply that reads what your colleagues message to you and then suggests replies, which you can choose to send with a click or tap. That might sound like Google’s existing Smart Replies, which is built into Gmail, Inbox and Allo. But Reply is Smart Replies for third-party apps, essentially. (Sign up for the beta here.)

The project, developed by Google’s secretive testing group, Area 120, is an experiment. Details are hard to come by. And final features have probably not yet been determined.

What we do know is that suggested replies are customized, based on what Google guesses you might say and how you might say it. Google divines this using algorithms that monitor how you communicate, where you are and what’s on your calendar. You’ll probably get a choice between three replies.

The first apps to support it should be Hangouts, Slack, WhatsApp, Line, WeChat, Facebook Messenger and Twitter. (Reply for Twitter will probably initially affect only direct messages, and not public replies to tweets.)

You can also use Reply to fully automate replies while you’re driving. Contacts are told that you “can’t chat right now.”

Reply will even override the “silent” setting on your phone if it knows you’re running late and someone sends you an urgent message.

The nascent technology behind Reply will almost certainly be applied in the future to mail-merge-type marketing, for example.

Today, email mail-merge software customizes canned messages for individuals, adding the recipient’s name, for example. As a technology journalist, I get a hundred such emails every day. They usually start with “Hey, Mike,” but sometimes they instead say something such as “Hey, FIRSTNAME.”

Future mail-merge software may customize a sender’s writing style based on the recipient’s preferences. This might even be determined after delivery, in which case senders would never know how their own communication was written in its final form.

Google’s Inbox and Gmail are well-positioned for this feature. A possible scenario is that senders could write detailed emails in their own language, then choose the “Smart Customize” option. (To be clear, this is all speculation, and I’m making up the branding here.) Upon arrival, the email is modified by a set of criteria encoded as part of the recipient’s email account, which itself is based on that user’s communications history.

People who prefer very short and concise emails, for example, may get a summary, whereas those who prefer all the details will get longer emails. Other preferences could include how colloquial the speech is, whether English or American spellings are to to be used, whether much of the information comes in bullets or running prose — a whole range of criteria is possible, even changing to a foreign language.

But Google isn’t just using predictive technology to massage communications. The company filed a patent this week for a system for guessing what you’ll do online.

If the technology is implemented in Google Search, it will start loading web pages before you even click on the URL to navigate to them.

The patent would make these guesses in part based on your subtle mouse movements, your search history and other factors.

That sounds to me like a first step toward more automated browsing.

Google’s “I’m feeling lucky” link might one day be moved to the Chrome browser; press it at anytime, and you’ll go where Google thinks you want to go. By repeatedly clicking the “I’m feeling lucky” button, you’ll surf the web based on A.I. choices, not your own.

Again, the predictive web surfing method is a patent. It’s just an idea at this point.

But other Google predictive A.I. has been in use for a long time.

When you take pictures, you often want to modify them: Boosting the saturation, changing the crop, adding a vignette or making other improvements.

Google Photos uses A.I. to choose photos for modification and then apply some changes. These appear in the “Assistant” tab. There you’ll find pictures combined into collages or animations.

A “then and now” feature combines into a collage two pictures of a person (identified through A.I.), one taken some time in the past, and another more recently.

Google photos selectively constructs albums of an event, or movies built with videos and photos, where a soundtrack is applied.

As with other predictive technology from Google, the guesses are presented as an option, which can be saved or shared with a click or two.

In the future, you might choose something called “Smart Photos,” where pictures are selected, edited and posted without any involvement by you. You might gain the benefits of social networking without spending so much time on it.

We’re clearly on a trajectory toward full automation — self-driving cars.

In our self-driving future, we assume that riders will at least control the destination. But not necessarily with specificity. One could imagine an autonomous vehicle feature where the passenger says, “Take me to a good restaurant,” and the car decides based on past preference, table availability, traffic, the knowledge that you’ll be going to a movie and the information about when that movie starts and where the theater is located.

I view Google’s automation as the cruise control or emergency braking assist of our information browsing and communication, with full or near-full automation coming eventually. We’ll choose the “destination,” or desired outcome, and A.I. will take care of the repetitive chore of, say, research or email interaction.

That sounds outrageous until you consider the degree to which people with human personal assistants do this sort of thing, for example letting memos and emails be drafted or crafted entirely by the assistant, and then only signing off.

Replace a great personal assistant with A.I. Automation, and it’s easy to imagine the future of the Google-style predictive internet.

It will transform business, and mostly for the better. This is the vision of an A.I. future where A.I. helps us, rather than replaces us.