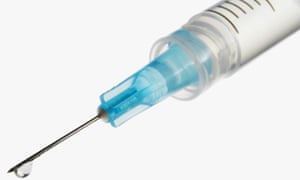 Police in Pakistan have arrested four suspected members of a gang accused of tapping a 17-year-old girl’s spinal fluid without her knowledge and selling it on the black market.

According to police in the city of Hafizabad, the gang members pretended to be government officials carrying out medical research. They promised the victim’s father a monthly fee in exchange for his consent to a blood test, saying the money could go towards his daughter’s dowry.

“It’s one of the strangest cases of my career,” Afzal Butt of the Hafizabad police department said.

Spinal fluid helps to diagnose diseases such as cancer and meningitis, but police speculated that the liquid, which is extracted by inserting a needle through the vertebrae, could be sold to desi hakeems, or homeopaths.

The victim’s father noticed something was wrong on Saturday when his daughter came home feeling weak after the procedure.

Local media reported that the gang had extracted her bone marrow, but Dr Rehan Azhar, a medical superintendent at Hafizabad hospital, said an examination carried out by his staff revealed the injection was made for the purposes of spinal fluid removal.

Bone marrow extraction, he said, was a complicated procedure, while the removal of spinal fluid was relatively simple. He did not know why the gang did it, he said.

After the girl’s father registered a formal complaint with police, officers raided a location in the east of the city, finding a bottle and a syringe.

All four members of the gang are under investigation. Because the victim was stripped naked for the procedure, they could also face charges relating to sexual abuse, Butt said.

Shahbaz Sharif, the chief minister of Punjab province, has ordered free follow-up medical treatment for the girl and a report on the incident from Hafizabad police.

Hafizabad lies in Punjab’s so-called “kidney fields”, a route between Islamabad and Lahore known for the presence of organ traffickers.

Pakistan outlawed the commercial trade in human body parts in 2010, introducing jail sentence of up to 10 years, but patchy implementation has eroded initial gains against the trade.