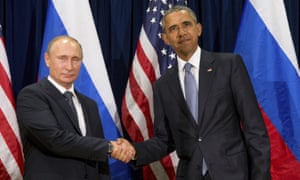 Everyone can lie. That is the agony and the ecstasy of the internet. It is guilt-free, open-season, licensed mendacity. You can forget the glory days when it was the empire of the weak, the kingdom of the free. It is like capitalism in the 19th century. It is raw, unfettered, unreliable power. We are right to fear it.

Barack Obama’s questioning of Russia’s reputed involvement in the American presidential election need not take long. Prima facie, it was blatant. Vladimir Putin’s denials are worth as much as Donald Trump’s.

They would deny it, wouldn’t they? Hacking and leaking private material about the Hillary Clinton campaign through WikiLeaks, along with Facebook’s facilitating of fake news, plausibly influenced a key demographic in three states with knife-edge results.

For America to protest at such intervention is rich, after decades of meddling in elections in Latin America and elsewhere. But two wrongs don’t make a right. The more we know, the better.

The age of such cyber-conflict is in its infancy. Wars in which clumsy bombers blast hell out of defenceless cities are medieval when set against the intrusion and destruction promised by the internet against states and individuals. Every week we learn of the impotence of authority in the face of hackers and fraudsters, infiltrators and anarchists. How far they can conquer states must be moot. But their most powerful weapon remains the oldest: information.

Fake news inputs facilitated by Facebook clearly poisoned America’s democratic process in ways that would be actionable under domestic law. For the corporation’s boss, Mark Zuckerberg, to protest that he is “just” a tech distributor and not a media corporation is rubbish. It is like Northcliffe claiming to be in the wood pulp business.

The company does not just disseminate unedited and unmodulated; by doing so it generates vast (and often untaxed) revenues for itself, and also for those creating this “news”. Witness the sports cars bought by Macedonian schoolboys through telling lies about Clinton. Signs of frantic editorial activity at Facebook in recent weeks indicate an awareness of guilt.

If the internet is in its infancy, so is its regulation. The swiftness with which the Facebook/Google duopoly has mastered algorithmic targeting and thus advertising revenue has stunned all concerned. The duopoly over gathering and disseminating information would attract instantaneous control were it within one state’s jurisdiction. Market plurality is an iron law of capitalism. It must be enforced.

How this might be done has a hundred answers; that it must be done is clear. Current farcical attempts by the British government to regulate newspaper content are like building sandcastles in a tsunami. Domestic and international law has to be brought up to date if the wheels of democracy are not to jam. The idea that this might emerge from Putin’s Russia, Trump’s America, Brexit Britain or the indolent European Union may seem fanciful. But sooner or later it must, and will, come.