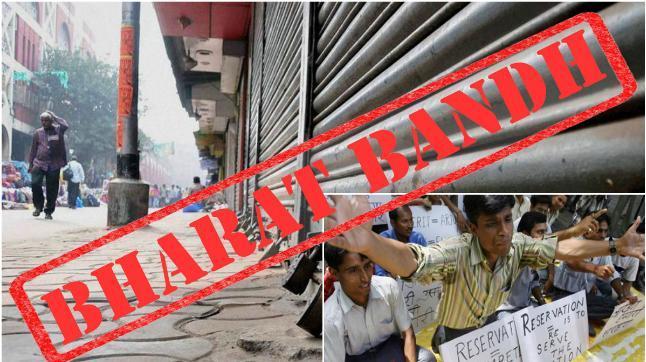 The collectors of the riot-affected districts of Bhind, Gwalior and Morena have suspended internet services till April 10, in anticipation of a situation similar to the one on April 2 – when seven people were killed during the Bharat Bandh called by various Dalit organisations.

The bandh had been called in protest of the alleged dilution of the SC/ST Prevention of Atrocities Act.

Upper caste organisations, which are against reservations, have called for a Bharat Bandh to be held tomorrow.

The Bhind Police have so far not arrested anyone for the murder of the four people who were gunned down during the violence that erupted on April 2.

Of the four, three are Dalits. 18 people have been booked for their murders.

All the accused are absconding.

A case of murder has been registered against two policemen for killing the fourth person, identified as Mahaveer Singh Rajavat. The policemen, too, have not been arrested so far.

The three Dalits who were killed in the violence have been identified as Pradeep Jatav, Aakash Garg and Dashrath Jatav.
“A reward of Rs 10,000 has been declared on the heads of each of (the) 18 accused who are still absconding,” police said.

In Gwalior, where two Dalits – Deepak Jatav and Rakesh Jatav – were killed during the violence, three people have been arrested.

The names of the three men arrested are Rishabh Bhadoria, Rishi Gujjar and Mahendra Chouhan.

Police have booked a murder case against six more people, who are still at large.

Mahendra Chouhan and another man, Raja Chouhan, who were filmed firing at a crowd pf protesters, have also been booked for attempting to commit culpable homicide under section 308 of the Indian Penal Code (IPC).

And in Morena, 20-year-old Rahul Pathak, who was standing on the terrace of his house, was gunned down while the protests were being carried out.

On the basis of the CCTV footage accessed from his house, police have booked one Ramu Gujjar for murder, under section 302 of the IPC.

According to police, Ramu Gujjar took advantage of the riot-like situation and shot Rahul Pathak against whom he had an old score to settle.

Gujjar, too, is absconding and a reward of Rs 5000 has been declared on his head.