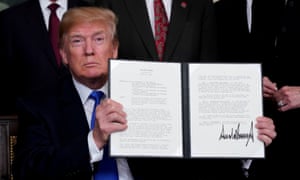 Atrade war between China and the US that lasts 20 years or more is a barely believable idea. It offers an Orwellian vision of ceaseless and debilitating battles between trading blocs – battles that give politicians a convenient enemy and the leverage to impose themselves domestically.

Yet Jack Ma, the billionaire boss of Alibaba, one of China’s largest companies, says that everyone should prepare for a fight between the two mega-economies to drag on for at least the next two decades.

Ma’s views should not be dismissed lightly. He has been at the centre of trade between the US and China ever since Alibaba became the Chinese equivalent of eBay and Amazon rolled into one. And Ma has done more than most to ease tensions – by saying he would create a million jobs in the US (a promise he says can no longer be honoured).

He believes it is possible that Donald Trump and the next three or four US presidents will maintain a surcharge on the import of Chinese goods now that the American people are persuaded that their economy acts as a piggy bank for the world to rob.

Ma says Beijing should now understand that its 40-year project of improving China’s living standards by exporting huge amounts of stuff to the US is over. The next 40 years will be about exporting to the fast-expanding economies of the Middle East and Africa and even to Europe, which lies at the end of the Silk Road.

It is a situation that China’s communist leaders have been considering since the 2008 financial crash, when it became obvious that the inherent instability of the US economy was a long-term problem.

President Xi Jinping’s answer is what is called the belt and road plan, which he hopes will build trade links along a “belt” of land routes – to the north-west through Russia and to the south-west through Turkey – and a “road” of shipping lanes.

The infrastructure deals on offer from Beijing have failed to gain much traction so far. President Macron was initially enthusiastic, but then said the price of China’s financial and logistical help was too high. Kenya, initially keen on a free-trade agreement with China, pulled out earlier this year, saying the terms of the agreement would have crushed its fledgling manufacturing and construction industries.

So the US remains an important destination for Chinese goods, and will do for some time. Maybe that is why Beijing followed the softly, softly approach adopted by Mexico and Canada in response to Trump’s belligerence.

Last week, China increased trade tariffs on only $60bn of US goods, in response to the US’s slapping duties on $200bn of Chinese imports. Beijing knows that with the US midterm elections looming in November, the US president was primed to go further if provoked.

Sure enough Trump tweeted: “There will be great and fast economic retaliation against China if our farmers, ranchers and/or industrial workers are targeted!”

The outcome of these skirmishes matters. Yet there is an inevitability about a long-drawn-out war, given that both countries are – almost at the same time – entering an arc of decline brought on by ageing populations. This makes the battle for technological advances and intellectual property even more intense.

In Trump’s game plan, tariffs on imported goods are the same as a wall: they offer protection from enemies that seek to undermine you. However, any trade economist will tell him that protecting tech giants such as Apple and Intel from the surge in Chinese innovation only makes the situation worse. It encourages complacency. In the end, the demise of firms protected from competition becomes inevitable.

That is why Trump’s advisers –including Treasury secretary Steve Mnuchin, economic chief Larry Kudlow and trade negotiators Peter Navarro and Robert Lighthizer – are fighting among themselves over the timing and scope of tariffs. It’s possible the dispute could be truncated by the intervention of the World Trade Organisation, which has volunteered to mediate.

That, however, could just be wishful thinking.