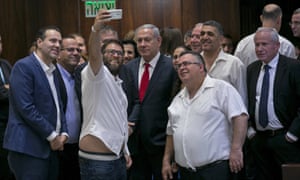 An Israeli magazine has fired its long-serving cartoonist after he portrayed Benjamin Netanyahu and his allies as pigs from George Orwell’s Animal Farm.

The illustration referenced the Israeli prime minister and members of his party taking a congratulatory selfie after passing a contentious law in parliament that has been decried as giving Jewish people more rights than the country’s minorities.

Avi Katz parodied the photo with a depiction of the politicians as characters from the 1945 novella in a cartoon for the Jerusalem Report, an Israeli English-language magazine owned by the Jerusalem Post newspaper.

“All animals are equal. But some are more equal than others,” the cartoon quoted from the book, which tells the story of farm animals revolting against their human owners but swiftly falling into authoritarianism.

In Orwell’s work, inspired by the early 20th-century totalitarian Soviet Union under Joseph Stalin, the pig leaders promise equality to all yet later declare themselves the privileged species.

The cartoon’s publication in the fortnightly magazine was met with online support but also anger by many on social media, some of whom suggested the portrayal of Israeli politicians as pigs was antisemitic. Pigs are considered impure in Judaism.

Following the debate, the Jerusalem Post said it would no longer work with Katz, who has contributed to the company for three decades.

“Avi Katz is a cartoonist who worked as a freelancer at the Jerusalem Post and in accordance with editorial considerations, it was decided not to continue the relationship with him,” it said in a statement, according to the Times of Israel.

Katz told the Guardian he “thought the cartoon was relatively mild and my firing was idiotic, but I’m delighted to see the enormous support I’ve received over the last couple of days”.

The Union of Journalists in Israel called on the Post to retract “this unacceptable step” and a colleague of Katz’s resigned in protest.

Haim Watzman, a Jerusalem Report short fiction writer, published his resignation letter on Facebook, saying he could not “be associated with a publication that dumps a staff member simply because his work has upset some readers.

“Journalism, when done well, always angers some readers, and it is the duty of the newspaper or magazine’s editors and managers to stand by writers and other members of the staff when readers complain about the analysis and opinions expressed by its staff,” he wrote.

A crowdfunding page launched in support of Katz has raised more than 60,000 shekels, roughly £12,500.

Despite his departure, the cartoon remained on the Jerusalem Report’s website on Thursday afternoon.