Home
Internet
The Internet Women Made 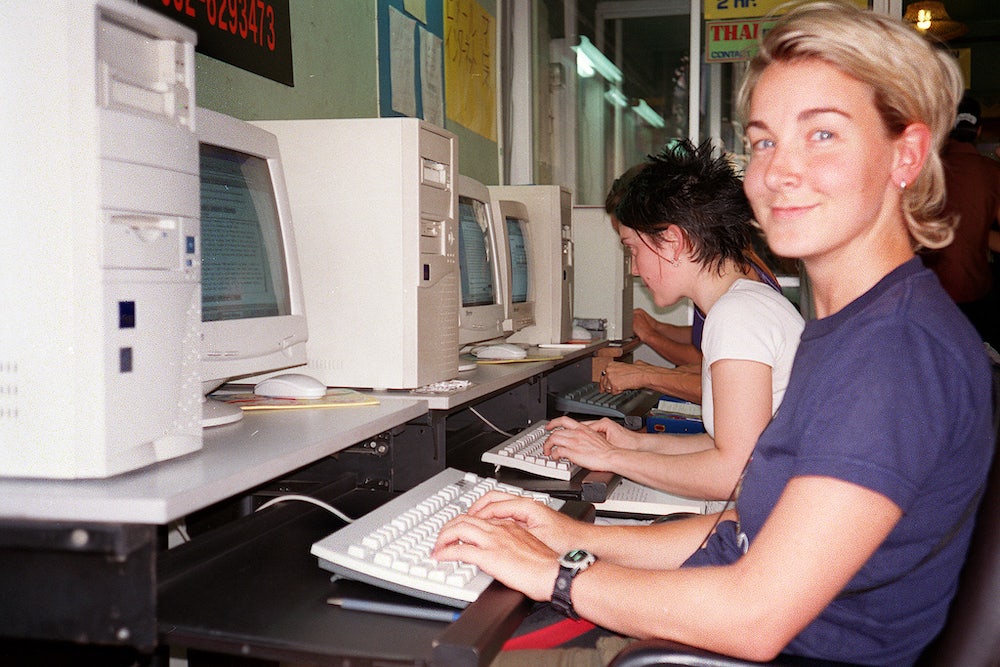 For years, bolstered by an under-resourced, uncritical, or chummily compromised tech press, the tech industry comfortably shaped its own narrative. The industry’s promises, to outsiders and to itself, were idealistic and appealing: The public sphere would be democratized, barriers to education would be lowered, and daily life would become more open, efficient, and free. These narratives got some things right—and they got a lot wrong. As tech continues to make history, it seems crucial to ask what, and whom, these stories leave out.

In her book Broad Band: The Untold Story of the Women Who Made the Internet, Claire L. Evans has written about women whose contributions to computing—and computer culture—are rarely highlighted in tech-history narratives (to say nothing of today’s tech mythos). Representing various phases in technological development, they are women who had a hand in building technical tools or were early explorers of the cultural applications of nascent digital technologies. They are mathematicians and programmers, academics and early-web personalities.

By Evans’s telling, what they all share is a focus on the capacity for computers to “enrich human life.” Broad Bandis not a book about the business of tech; in terms of influence and impact on the industry, the importance of the women featured may be slightly overstated. What the book’s subjects do represent is the importance of the user—the person logging on at home, rather than the startup guru—in shaping digital worlds. This inverse history is welcome, especially at a time when the internet economy tends to reward owners more than participants: The founders and employees of companies like Yelp and Facebook, for example, have made millions, while the users who generate the content their platforms rely on remain unpaid. It’s also a reminder, bittersweet, that the internet used to be a bit freer, and more fun, in no small part due to the work—both seen and unseen—of women.

Any survey of women in technology would be remiss to exclude perhaps the two most famous female computer-programming pioneers. Broad Band opens with this pair. The first is Ada Lovelace, a mathematician whose proofs are considered the earliest form of the computer program. The daughter of Romantic poet Lord Byron, Lovelace was born in London in 1815. Her mother, Annabella, insisted on providing her with a world-class mathematics education, in part to counterbalance the influence of Byron and his relatively chaotic, creative life. After marrying Charles Babbage in her late teens, Lovelace collaborated with him on the Analytical Engine, a computationally universal mechanical computer. Her writing on the Analytical Engine, Evans writes, “presage[d] the literature of computer science by nearly a century.”

The second is Grace Hopper, an autodidact, teacher, and Navy rear admiral, among many other things. Born in 1906 in New York City, she pursued a relatively unusual education for a woman of her generation, earning a Ph.D. in mathematics by age 28. After teaching at Vassar for several years, she joined the Navy Reserve, which led to a position at Harvard’s Computation Laboratory. Hopper stayed at Harvard after the war, where she developed one of the earliest known compilers, as well as COBOL, a programming language. By Evans’s telling, Hopper’s “most lasting contributions to the emerging field of computer programming all have to do with democratizing it.” In the mid-1940s, Hopper worked closely with the ENIAC (Electronic Numerical Integrator and Computer) Six, a group of women who programmed the first all-digital, general-purpose computer for the United States Army.

Both Hopper and Lovelace are regularly invoked in today’s tech industry. When a startup’s conference room or internal project needs a new name, they’re often referenced—a way of paying homage to technical women in the workplace, and a gesture easier than other forms of parity, such as equal compensation or representation in leadership. (They also provide genuine inspiration to women in what has become a male-dominated field; I recall several of my coworkers being excited about hanging a framed photograph of Hopper in the restroom, replacing a gallery of Ryan Goslings.) Evans is a lively writer, and she animates both Lovelace and Hopper in a treatment and tone that skew journalistic and high-detail, though often lacking in rigorous analysis.

For readers who are not particularly invested in the history of technical breakthroughs, the more compelling stories in Broad Band may be those that highlight unconventional contributions to computing and computer culture. Take Patricia Crowther. Crowther was a programmer by trade, but, as Evans details, her impact on the culture of technology wasn’t explicitly technical. As a caver, Crowther explored subterranean Kentucky alongside her husband, William; in 1972, the couple took part in an expedition led by the Cave Research Foundation that discovered a link between two of the largest known cave systems, Mammoth Cave and the Flint Ridge Cave system. The Crowthers divorced shortly thereafter, but Patricia’s detailed notes from her 1970s explorations provided the foundation for William’s “Colossal Cave Adventure,” a popular text-based computer game that is considered by many to be the prototype of today’s adventure games.

The women of Project One, a San Francisco warehouse commune populated by artists, hackers, and activists in the 1970s, had a more direct impact on culture. Their early interest in computers provided, Evans relates, the foundation for what is commonly understood as the first social network, Community Memory, a public, electronic, networked bulletin-board system that spanned four computer terminals placed in public areas across Berkeley and San Francisco. (An early handout for the network explained that it was a “communication system which allows people to make contact with each other on the basis of mutually expressed interests, without having to cede judgment to third parties.”) This period has been well-documented in Fred Turner’s excellent From Counterculture to Cyberculture, but it’s refreshing to read an account that includes more women, and doesn’t orbit around Stewart Brand.

As the third and final section glides into the 1990s, Evans focuses on a handful of women who understood the internet as a new medium for art and community. There is Stacy Horn, founder of ECHO, a bulletin-board system local to New York City (still active, in 2018), and Jaime Levy, who published zines on floppy discs, hosted a series of parties called CyberSlacker, and edited WORD, one of the first magazines on the early web. These networks feel more ancient than they are, in part because they feel so free: Before data-driven content, people were creative and strange with what they made or said on the proto-internet, unbridled by the incentive structures of corporate platforms. Nothing was optimized. The user-base was smaller, even local. The stories in this section serve as a reminder of a time when it really did seem the internet could change everything, including gendered power dynamics on and off the web.

Writing a feminist history of technology is in some ways an impossible task. It’s important to provide a corrective to male-dominated narratives, and yet such an account runs the risk of being seen as an appendix to the mostly-male sweep of history, rather than the core text. Changing this narrative, Evans argues, is essential to remaking the tech world to include both a more diverse workforce and a more diverse end product. Her recommendation is a three-step process that begins by seeing “who was really there at the most pivotal points in our technological history, without taking for granted the prevailing myths of garages and riches, of alpha nerds and brogrammers.” Mission accomplished. Step two: “Learn all the strategies of triumph and survival we can from our forebears.” The third, and final step: “We get to work.”

The trouble with this plan is that people are, and have been, doing all of this work for many, many decades—but it is complicated, and seemingly endless. Overall, Broad Band suffers from exactly this absence of historical consciousness. While it’s tempting, for instance, to think of the stories Evans is telling as part of a lost and now-recovered history, historians and scholars have been working with the same material for decades, and the characters in Broad Band were also known in their time. Horn and Levy were both written up in the New York Times, as was Brenda Laurel, the founder of Purple Moon, a gaming company geared toward pre-teen girls. They were hardly obscure—at least, until their commercial enterprises folded. Women were—and still are—telling their stories. The question is always who will listen.

Broad Band’s final exhortation, with its inspirational optimism, reminded me of a trip I took in the fall of 2014, to Phoenix, Arizona, where I attended, for the first time, the Grace Hopper Celebration of Women in Computing, an annual conference for women in technology and engineering. That year was not the conference’s finest. Satya Nadella, the CEO of Microsoft, gave a speech in which he discouraged women from asking for raises; better, he offered, to “have faith” in the system. A “Male Allies Plenary Panel” showcased white male executives sharing their own wisdom: “Just be great,” one advised.

I spent a lot of time chatting with engineers from my company by our hotel pool, and doing my customer-support job from the sidelines of the convention center basement, which held a sprawling and crowded career fair. Aisles of high-design tables and interactive exhibits represented companies like Google, Microsoft, and Cisco, as well as startups from every VC fiefdom. As a woman in tech, but not a technical woman, I felt vaguely out of place, and I made sure to keep my identification badge prominently displayed over my t-shirt. As with so many women-in-tech events I’ve attended, it was hard to shake the uneasy feeling that the event rested on some false promises, and I wondered, cynically, whom such events most benefited: the attendees, or the well-publicized corporate sponsors.

For the most part, the convocation of 8,000 technologists—almost entirely women, with diverse technical talents, experience, and expertise, eager to network, swap notes, and connect—was a heartening antidote to that year’s persistent discourse about the “pipeline problem.” It was encouraging and affirming to be in a space dominated by women, a relief. There was so much excitement, so much potential; an element of freedom. I wished that more people could be there to see it.