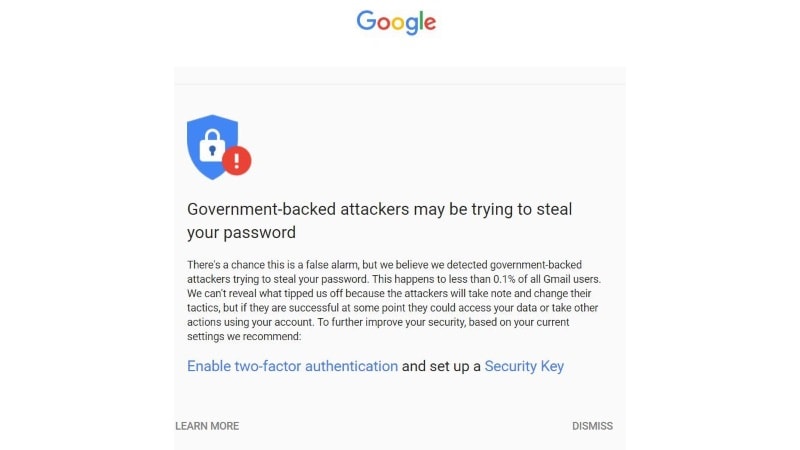 Certain public figures including notable journalists and professors from the US have reportedly started receiving security warnings by Google that says that their accounts were under attack by government-backed attackers.

The security warning, with the title “Government-backed attackers may be trying to steal your password”, reads, “There’s a chance this is a false alarm, but we believe we detected government-backed attackers trying to steal your password. This happens to 0.1 percent of all Gmail users. We can’t reveal what tipped us off because the attackers will take note and change their tactics, but if they are successful at some point, they could access your data or take other actions using your account.”

The search giant then goes on to recommend ways to enhance the security of user account by setting up a security key or installing password alert.

Some users who have received the warning have reportedly claimed that their accounts are already protected by two-factor authentication.

Speaking to Ars Technica, a Google spokesperson said that the recent warnings might be a result of the hacking attempts made on user accounts over last month or so, and pointed to a Gmail Help forum post that fully details the issue. The spokesperson told the publication that Google delays these warning to “prevent those behind the attacks from learning researchers’ sources and methods for detecting the attacks”

Ars Technica suggests that the warnings might have arose out of a spear phishing campaign that was reportedly launched by Russian hackers a mere six hours after Donald Trump won the US presidential election, and was disclosed by security research firm Volexity.