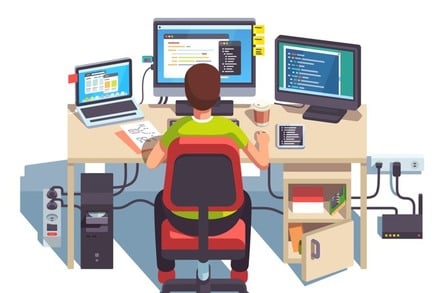 Developers who use GitHub – 28 million at last count – now have the option to edit code with the click of a button using Gitpod, an integrated development environment (IDE) that can be launched directly from the social code hosting site.

Based on Theia, an open source cloud-and-desktop IDE developed by Ericsson, IBM, TypeFox and RedHat, Gitpod can be invoked by prefixing a GitHub URL with “https://gitpod.io#” or using a Chrome browser extension.

Gitpod runs in a cloud-based Kubernetes container using a Docker image that can be customized with user-specified tools. It will check out the appropriate version of file being examined in the IDE and, when working on a GitHub issue, it will create a git branch and set the commit message. If launched from a pull request, it activates code review mode.

The editing app can handle approving and merging pull requests too.

“Gitpod gives developers full featured terminals to run any processes such as compiling, linting or simply running tests or your application,” said Sven Efftinge, CEO of TypeFox, in a blog post. “Any Docker image works and you can even configure Gitpod to automatically launch certain tasks on start.”

Gitpod’s container-based workspaces are disposable. While this avoids the maintenance burden of workspaces on local devices, it also demands a few seconds of waiting while the container gets spun up and provisioned.

That means in addition to syntax coloring, users can expect code completion, diagnostic messages, documentation when hovering over a term, navigation to method, function or variable definitions, and refactorings.

C#, Swift, Clojure, Groovy, Objective-C, Markdown, Less, XML and other languages benefit from syntax highlighting but not much else.

According to Efftinge, support for for Bitbucket, GitLab, and Jira is under development, along with debugging and collaboration capabilities.

Gitpod is available under a tiered pricing scheme. The free tier provides 10 hours of usage per month with unlimited workspaces and private repos. The basic and pro tiers, $19 per month tier (100 hours) and $39 per month (300 hours) respectively, are not yet available. There’s also an on-premises version for enterprises.