The speed bump affects the majority of Comcast’s approximately 200,000 customers throughout the state, according to Comcast spokeswoman Julianne Phares.

“We know that speeds are something that are really important to our customers and are critical to their ability to use the internet for the things that matter most to them, whether that’s streaming (or) whether that’s applying for jobs,” Phares said on Tuesday. “The internet is critical to any family, and so we continue to find opportunities to increase speeds at no cost for our customers whenever we can.”

Some customers — specifically the most-popular, highest-speed package customers with older modem models — have to upgrade their modems to get the speed increase, Phares said.

“It’s important to note that most customers already have the latest Wireless Gateway modem, and if they don’t, they’ve already been informed that they could receive faster speeds by upgrading their modem for no additional charge,” Phares said in a follow-up email.

The local office hasn’t encountered any problems in the speed increase since it began on Jan. 9, according to JoAmy Hodges, assistant manager of the Farmington Comcast location..

“It’s been a pretty easy transition. Usually the customer gets the email, they unplug and reboot their modems and speeds are there,” Hodges said, adding that customer reception has been positive. “Oh, they love it any time we have a speed increase. … Everyone wants faster internet.”

Comcast, a national internet service provider, has increased its internet speeds 17 times in as many years in New Mexico, the press release states.

“These increases reflect our commitment to delivering the fastest speeds to our customers, just like we’ve done almost every year for more than a decade,” Comcast’s New Mexico area manager Chris Dunkeson said in a press release.

Megan Petersen covers business and education for The Daily Times. Reach her at 505-564-4621 or [email protected] 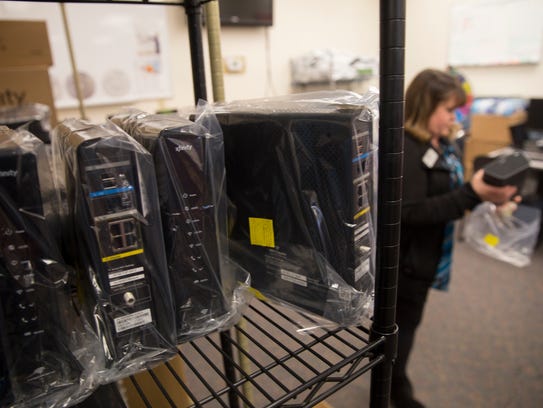 Many customers just have to reboot their existing modems by unplugging them briefly for the new internet speeds to kick in, according to Comcast’s Farmington manager JoAmy Hodges. Others may have to swap them out for newer models. (Photo: Jon Austria/The Daily Times)