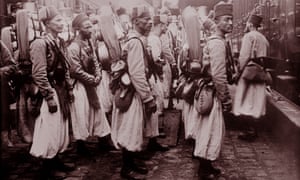 A biting wind whips across the rolling countryside, cutting through the crowd gathered on a hillside overlooking Notre Dame de Lorette, France’s national war cemetery. Huddled amid what remains of the 440 miles of trenches that made up the western front, they shudder out of shock and surprise rather than cold while listening about life for the men who endured the horrors of the first world war.

More than 1.5 billion artillery shells fell in this part of northern France, close to the town of Arras, prompting soldiers to nickname the farmland in which they fought “the hell of the north”, or poignantly, “the cemetery”. It is the experiences of some of their Muslim comrades, however, that particularly capture the crowd’s imagination, drawing looks of disbelief at a history that has never been fully told.

Having travelled thousands of miles from hotter climes, these soldiers went into the trenches with imams whose duties included leading group prayers and reciting the call to prayer into the ears of the dying. Special orders had been issued on when and how to pray. “If the war is intense and the Muslim does not have a moment of peace to fulfil his prayer he can just move his head and torso,” said a declaration from French high command. “In the case where there are moments of calm, one can complete the prayer together.”

Hot halal food was routinely served, prepared by cooks who had accompanied the men. When medical supplies ran out, some of these soldiers used traditional herbal medicines from their homelands to help treat injured comrades, whatever their faith. Others taught their folk songs to those serving alongside them, whatever their language, in between the brutal onslaughts of trench warfare.

The evidence of their sacrifice is on display in a corner of Notre Dame de Lorette, which contains the graves of 40,000 French soldiers who fell on the western front. The Muslim headstones are distinguishable not just by their Islamic inscriptions but because they also tilt eastwards towards Mecca. They were designed by the French painter Etienne Dinet, who converted to Islam in 1908.

The crowd of mainly British Muslims, who were at Notre Dame de Lorette before this weekend’s Armistice Day commemorations, ended their visit by praying over the graves of the north African soldiers who shared their faith. Their visit formed part of a groundbreaking project by an organisation called the Forgotten Heroes 14-19 Foundation, which has, for the first time, documented the contribution of all the Muslims who fought and worked for the allied forces during the first world war. The 19 in its name refers to the conflict that was caused by the French military presence in Syria in 1919 after the first world war ended.

Researchers have spent the past six years delving into military, diplomatic and private archives, including diaries and letters, across 19 countries, accessing more than 850,000 documents in French, English, Farsi, Urdu, Russian, German and Arabic, as well as hundreds of images. They estimate that 2.5 million Muslims contributed to the allied cause either as soldiers or labourers, the first time such a figure has been established.

The foundation was founded by a Belgian, Luc Ferrier, 53, after he came across his great-grandfather’s first world war diaries in his attic in which he wrote extensively about the “Mohammedans” he encountered in the trenches. Gripped by fascination, Ferrier delved into the history books to learn more, but found that there was little information available.He began conducting his own research, initially through Belgian and French war records, and realised there was a bigger story to tell. In fact, he became so engrossed by it that he gave up his job in the aeronautical industry to establish the foundation in 2012 and devote his life to documenting the role of all Muslims involved in the war.They were drawn from across Africa, India, the far and middle east, Russia and even America, but it is their heart-touching stories of living and dying alongside European Christian or Jewish counterparts that have resonated the most with Ferrier and his team. Knowing this history, they say, could help overcome some problems in the Europe of today.

Documents uncovered have shown instances of imams, priests and rabbis learning each other’s burial ceremonies and prayers to lay the dead to rest on the battlefront. There are reports of Muslim soldiers sharing food with hungry civilians, while French, Belgian and Canadian officers expressed surprise at their humane treatment of German prisoners of war. When asked to explain their conduct, the soldiers quoted the Quran and the teachings of Muhammad on how enemy combatants should be dealt with.

Ferrier, who is not a Muslim, said: “The far-right and Islamophobia is on the rise throughout Europe. Our project is about making all people across the continent understand that we have a shared history. This is not about politics or colonialism. We are simply presenting the facts because this is a story that the whole of Europe needs to know.

“Muslims are portrayed as the enemy within, that they are recent arrivals who have never made a valuable contribution to Europe. But we can show that they have sacrificed their lives for a free Europe, have helped to make it what it is and that they have a right to be here.”

Central to the foundation’s ethos is spreading knowledge of its findings to young Britons and Europeans in particular, with the aim that this will help future generations better understand the Muslim communities living among them. The battlefield tours, entitled The Muslim Experience in World War One, are organised in partnership with Anglia Tours, a company that specialises in battlefield visits for British schoolchildren.

In addition to visiting the trenches, memorials and graves, and hearing the human stories behind them, the tour also includes a visit to the El Badr mosque in Amiens for a presentation on the foundation’s research, followed by a traditional north-African meal. Non-Muslim visitors are also encouraged to witness evening prayers.

Yusuf Chambers of the Muslim Heritage Trust, which works with the foundation in Britain, said: “We are trying to build bridges and what better way to do this than by sharing a meal and socialising together?

“Our work is focused on all communities and ages but particularly the young. We want people to know about this history because we want every British and European child to say that Muslims were heroes of the first world war too.”

The foundation’s work has already caught the eye of first world war experts. Last month, Ferrier addressed historians at Harvard University and he has also presented a paper to the UN. Plans are under way for a book next year that will contain extracts of the documents and images that have been uncovered, and an exhibition is to tour Europe. As the research continues, he estimates that the current figure of 2.5 million Muslims helping the allies during the first world war could increase.

For those visitors who attended last week’s inaugural tour, what proved particularly powerful was hearing letters read out from Muslim soldiers to their families in which they shared their fears and faith. One from an Algerian soldier stationed in the trenches around Notre Dame de Lorette in 1916 read: “I swear by God and by that which we hold sacred, I will never stop saying my prayers, I will never abandon my faith even if I am assailed by ordeals more terrible than those in which I find myself in.”

Visitor Tayaba Shaukat, aged 25 from west London, said: “It’s when you hear these personal testimonies that you really understand what these men went through. The experience of European soldiers in the first world war has been well documented by poets and other writers, but we don’t know anything about the lives of the Muslim and other colonial soldiers and this has to change.”