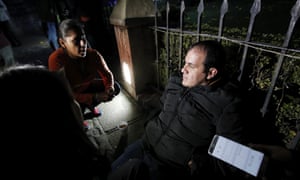 The former Mexico forward Cuauhtémoc Blanco declared a hunger strike on Saturday, to protest an impeachment process that seeks to remove him as mayor of the city of Cuernavaca, a state capital near Mexico City.

The proposal to unseat Blanco, who became mayor of Cuernavaca in December, was approved on Thursday by the Morelos state legislature and was sent to state supreme court judges who are expected to issue a ruling in early January.

Since the 43-year-old took over the colonial city of 350,000, opponents have questioned his attendance record at city hall meetings and his political experience, saying advisers make decisions on his behalf.

“He might be a good man but he is not qualified to rule,” said constitutional lawyer Raul Carranca, who filed the impeachment petition before the state’s legislature.

Blanco, who played for Club America and the Chicago Fire and had a spell with Real Valladolid in Europe, played at three World Cups and is Mexico’s second leading scorer of all time, with 38 goals.

Off the field, he made headlines for his hot temper, including a 2007 incident in which he was filmed hitting a Mexican sports journalist.

Carranca has also alleged that Blanco cannot adequately prove his residency in Cuernavaca.

Speaking by telephone from Cuernavaca, where he began his protest at dawn, Blanco told Reuters elements of the trial were baseless.

“What they’re doing is outrageous,” Blanco said. His hunger strike, he added, would continue indefinitely.