Home
Internet
Days after pledging to expand internet, Ethiopia’s government shuts it off 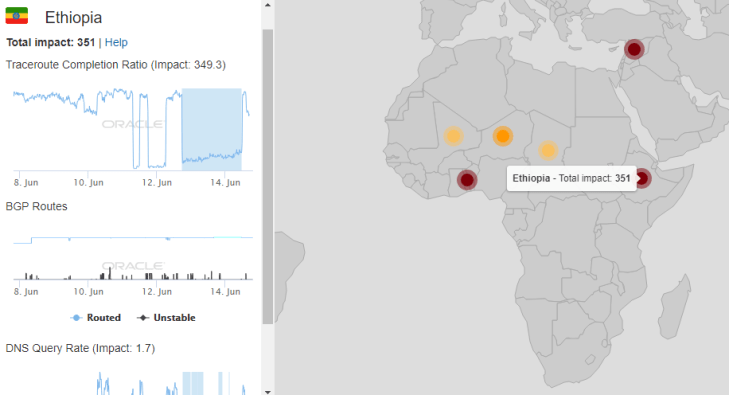 Days after Ethiopian ICT officials made public pledges to improve net access, the government began playing on-again, off-again with the internet — shutting it down (almost completely) to coincide with the country’s national exams.

Data provided to TechCrunch from Oracle’s Internet Intelligence confirmed intermittent net blackouts from June 11 to 14, with connectivity returning for brief periods during that time-span.

Sources on the ground, including in the country’s tech community, confirmed to TechCrunch internet stoppage over the period.

Mobile and IP connectivity in Ethiopia is managed by state-owned Ethio Telecom, though the government — led by newly elected Prime Minister Abiy Ahmed and President Sahle-Work Zewde — has committed to break up the telecom and privatize it.

On the reason for the outage, the government of Ethiopia has not issued a statement and a government official in charge of ICT policy did not respond to a TechCrunch inquiry.

Press reports, and a source speaking to TechCrunch on background, said Ethiopia’s internet stoppage was done to stop students from cheating on national exams, which took place this week.

Earlier this week I attended Ethiopia’s ICT Expo and first Startup Ethiopia event, moderating and sitting on panels with Ethiopian government representatives to discuss the country’s startup community and internet landscape. Several officials, such as State Minister of Innovation and Technology Jemal Beker, named specific commitments to improve the country’s internet quality, access and choice within the next year.

Ethiopia took policy steps in that direction, announcing steps this week to issue individual telco licences by the end of 2019.

The East African nation of 100 million with the continent’s seventh largest economy is bidding to become Africa’s next startup hub.

Ethiopia has a budding tech scene, but lags the continent’s tech standouts — like Nigeria, Kenya  and South Africa — that have become focal points for startup formation, exits and VC.

One thing discussed at Startup Ethiopia was the need for startups — most of which operate on mobile platforms — to have consistent, affordable and accessible internet to drive forward business models.

Ethiopia is taking steps and making statements in that direction, but this week’s net stoppage shows there are still hurdles and disconnects.

One of those is the country’s government pursuing an internet shutdown just days after attempting to convince investors, angel networks and a global tech audience it’s serious about making Ethiopia an African startup hub.