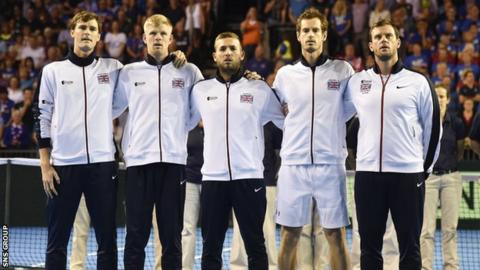 The losers will drop down into the Europe/Africa zonal group.

After suffering a first round loss to Spain, GB are featuring in the play-offs for the first time since joining the top-level World Group in 2014.

Britain won the trophy in 2015 when Andy Murray led the way to a first title for 79 years.

Former world number one Murray missed February’s defeat by Spain, as did Kyle Edmund, who is now GB’s highest ranked player at 22 in the world.

Murray has not played since Wimbledon last year but is aiming to return to the ATP Tour next month, following hip surgery in January.

Denis Istomin, 31, is Uzbekistan’s most high-profile player but has dropped to 91 in the singles rankings.

GB’s last appearance in Glasgow was a 3-2 semi-final defeat by Argentina in September 2016.