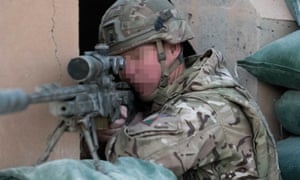 One of the most experienced snipers in the British army, who is currently based in Iraq, says he has not been allowed beyond the perimeter fence of Camp al-Asad, a remote, highly fortified base in the desert of Anbar province.

The soldier, one of a few hundred British special forces in the country, told reporters that he “would love to go out”. “I would go to Mosul tomorrow,” he said, but added that he had been told to help train Iraqi soldiers instead.

Part of a 500-strong British contingent in Iraq, the sniper’s confinement to camp is partly down to the risk-averse mood of the UK parliament – and the British public – following hundreds of personnel deaths in Iraq and Afghanistan. Although the MoD never comments on special forces, a few are engaged near the frontline in the fight to retake Mosul from Islamic State (Isis), but the bulk are engaged in training either the Iraqi army or the Iraqi Kurdish peshmerga.

The colour sergeant, in his late 30s, was deployed in October with 4 Rifles and has recorded 47 confirmed kills. His name has been withheld by the Ministry of Defence for security reasons. His task is to protect the trainers, observing people in and around the camp on a video feed from balloons or lying camouflaged, hidden on rooftops, watching through high magnification sights.

Isis fighters in suicide vests attacked the camp earlier this year: all 10 were killed. Militants fired rockets at the camp in August but did not inflict any casualties. It has been quiet since.

The soldier said everyone in his sniper team of 16 was keen to get out, adding: “I have been in [the army] 20 years now and it is something you are trained to do, you know. And it is something, not in a sadistic way, we enjoy. The army has spent a lot of money on sniping and the capability and we are just here to provide that capability.”

The lack of frontline exposure also reflects current army philosophy that it is better to build up local forces to do the fighting. Apart from Iraq, there are small British army units deployed elsewhere around the world in training roles. The strategy also reflects the reality of a shrinking British army.

The UK has 250 troops at Camp al-Asad, part of a 2,000-strong international coalition – dominated by the US but also including Danes, Estonians and Latvians.

The Americans, British and others trained the Iraqi army in the years after 2003 but, given the way it collapsed in Mosul in 2014 when faced with a much smaller Isis force, their level of success was questionable. British officers have set a low bar this time, hoping to turn Iraqi solders not into a force comparable to a US or European one but just to make them better than Isis.

The sniper, brought up in a pit village, said he wanted to be a sniper from early on, when he went out hunting in the countryside with his father. He trained for a year and became a sniper in 2003. He fought against Jaish al-Mahdi fighters in Basra, southern Iraq, in 2007, while the rest were mainly Taliban fighters.

How can a sniper tell whether someone approaching the base is a wandering shepherd or a suicide bomber? The Briton said it was mainly down to experience. The most satisfying part of the job, he said, was protecting civilians, police and fellow soldiers.

He recalled one incident in particular. “One of the Afghan police got shot. There were single rounds coming in every 20 minutes. The OC [officer commanding] at the time asked me to go and deal with it. Just laid on the roof. Couple more rounds came in. Targeted where the shots were coming from. And just waited there for a bit.” As soon as the fighter emerged, the sniper said, he shot the man dead.

The sniper said there was one upside to the lack of fighting on this tour of duty. “It means at least we will all go back home,” he said.