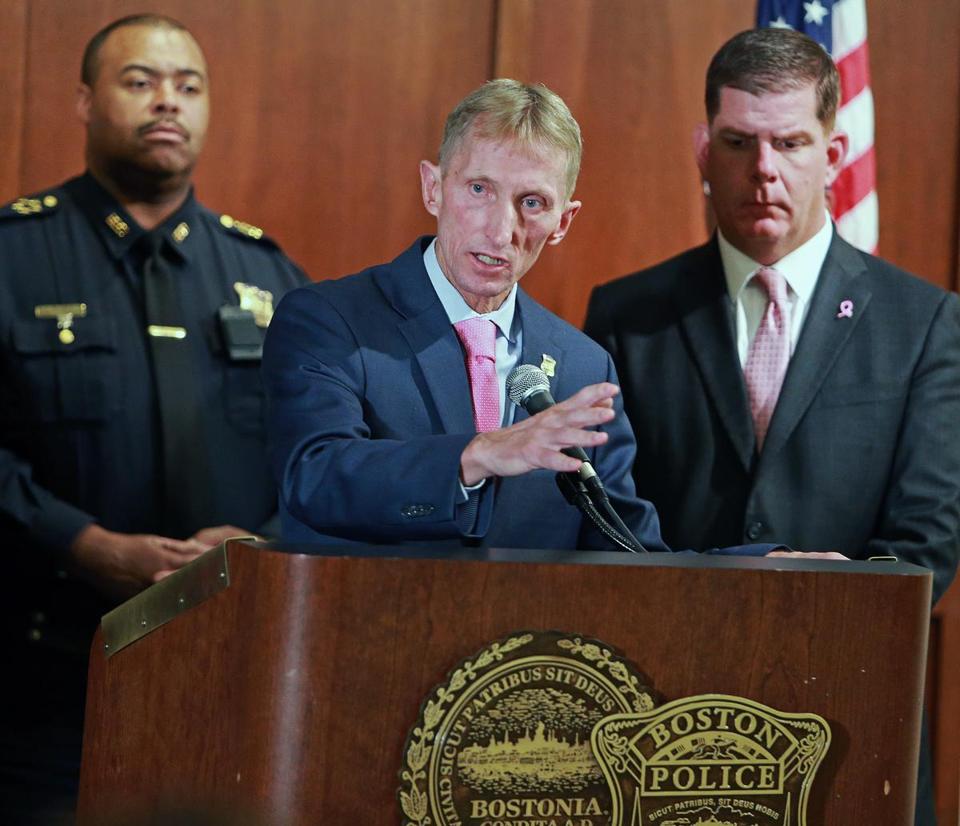 The Boston Police Department is on the verge of buying new software that will scan social media and the Internet for criminal activity and threats to public safety — a step that civil liberties groups say is a worrisome risk to free speech and privacy.

The software would be able to search blogs, websites, chat rooms, and social media platforms such as Facebook, Twitter, Instagram, and YouTube. It would provide law enforcement officials with an address of where the content was posted and allow police to create a “geo-fence” that would send alerts when new posts are made within an area that meets specified search criteria.

“The information looked at is only what is already publicly available.”

Mayor Martin J. Walsh, through a spokeswoman, said Friday that he supports the department’s plan to monitor social media and the Internet for public safety threats. Officials stressed that the focus will be on combating terrorism in Boston and the region.

Civil liberty watchdogs called the department’s plan for high-tech social media and Internet monitoring “alarming” and slammed the department for a perceived lack of transparency in selecting the software. The American Civil Liberties Union recently criticized police in two other cities for using similar software.

“The Boston Police Department did not go through any process to get feedback from the public,” said Kade Crockford, director of the Technology for Liberty Program at the American Civil Liberties Union of Massachusetts. The department did not ask “whether we want our tax dollars spent on something like this.”

Last month, the ACLU released a report that showed that law enforcement agencies used a surveillance program to track the protests in Baltimore and Ferguson, Mo., that followed the police-involved deaths of unarmed black men. Police departments acquired the information from data provided by Twitter, Facebook, and Instagram to Geofeedia, a Chicago-based company that analyzes public user content. Such information is available to 500 law enforcement agencies, including Oakland, Denver, Seattle, Philadelphia, Baltimore, and Austin.

In response to the ACLU report, the social media platforms either cut or reduced Geofeedia’s access to public user posts.

Elsewhere around the country, some departments spent between $14,000 and $30,000 to access the data on Geofeedia.

Chicago police use the software for investigations and large special events.

Guglielmi said that when Chicago police want to monitor publicly available social media posts, officials are required to seek authorization from a lawyer with the department. That request is then made available to the public for review.

The FBI signed a deal that will give it access to monitor Twitter’s “firehose” — every public tweet, the Globe reported recently. According to a summary of the agreement, the FBI said it will be able to “directly access the full firehose” and to “search the complete Twitter firehose, in near real-time, using customizable filters.”

FBI officials have said, “Twitter is a platform where news first breaks on terrorist attacks, military actions, epidemiological events, and natural disasters, among other topics.”

The city’s new technology will be used by the department’s Boston Regional Intelligence Center and select personnel with the Metro Boston Homeland Security Region.

Details about the Boston effort surfaced in a solicitation of proposals for vendors.

The department wants a Web-based software application or integrated services “that will proactively alert personnel to threats communicated via social media and/or online open source platforms,’’ according to the request for proposals.

According to department records, the proposed software will be able to collect data and alert law enforcement “in near-real-time to significant or threatening social media or online open source content based on user input.” The software will also be able to augment use of terms, slang, and verbiage relevant to the user, and determine relationships among various users.

Proposals by companies that want the Boston contract are currently before an evaluation committee that will select a vendor in December, McCarthy said.

The contents of each proposal submitted will not be public until after a contract has been awarded, he said.

Crockford, of the state ACLU, called the program a waste of resources and worried it would be used to monitor Black Lives Matter activists, Tea Party enthusiasts, and anyone criticizing the government.

“We have a right to speech, and programs like this chill that speech,” she said. “The Boston Police Department is supposed to be operating on a community policing framework; monitoring and tracking posting habits . . . is not only a threat to civilization but a threat to ideas.”

Crockford questioned whether the software will be able to deliver on the promise to identify threats.

Take, for example, the ways in which “bomb” is used, she said: “That party was the bomb.”

“There is a lot of noise on the Internet, and the vast majority of it has nothing to do with crime,’’ she added.

But, even though police say there are no specific threats to the city or surrounding towns, some say the department’s effort to step up its intelligence is a worthwhile endeavor.

“We’re in a world where you can’t be too careful,” said Sam Tyler, president of the Boston Municipal Research Bureau, a fiscal watchdog. “If there’s a sophisticated process to identify terror threats through the Boston Regional Intelligence Center, it makes sense.”

“We’ve had our own local experience with [terrorism],” he said. “Concerns about safety are not without incident. The planes took off from here on 9/11, we’ve had the Marathon bombing. . . . It’s not a potential; it’s here.”

Law enforcement investigators using the technology — which is in use at other departments around the country — will be able to mask themselves by creating virtual identities, documents show. The department plans to spend up to $1.4 million on the software and expects to select a vendor no later than Dec. 5.

“The technology will be used in accordance to strict policies and procedures and within the parameters of state and federal laws,” police spokesman Lieutenant Detective Michael McCarthy said in a statement.